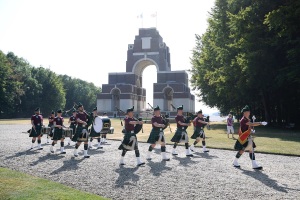 Campbell College CCF Pipes and Drums at Theipval. A son of Larne, Maurice Adams, a veteran and Old Campbellian, who died on this day, was one of the highest ranking Naval medical officers to come from NI. Today’s Roll includes four men who are remembered in France, Cassino and El Alamein.

We will remember them