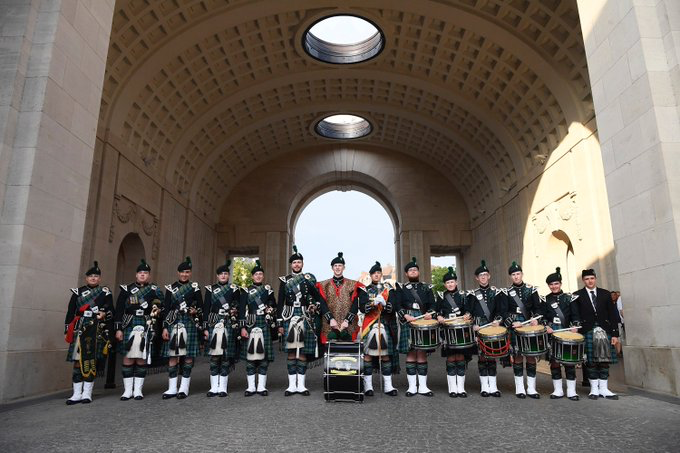 Campbell College CCF Pipes and Drums at the Menim Gate 2019. Tomorrow marks the anniversary of the Battle of Passchendaele – The Third Battle of Ypres. Twelve former students of Campbell College, Belfast were killed during the battle. Three men from Castlerock fell.

The Third Battle of Ypres, or the Battle of Passchendaele as it is known, started on 31/07/1917 and lasted three months, one week and three days; ending on 10 November of that year.
During the disastrous battle of Passchendaele, men from the 36th Ulster Division and 16th Irish Division fought side by side; both Divisions suffering horrendous losses, 1,200 being killed on 16th August alone. The 36th and 16th only fought together on two occasions during the Great War, and those two battles were to reflect a story of triumph and disaster – the triumph of Messines is well known, but the disaster of Passchendaele is virtually forgotten in Ireland. Passchendaele has been described as “a Golgotha, a dead man’s land, a swamp of death”. That description only gives our generation a small insight into what the men who fought had to contend with.

Twelve OCs (Old Campbellians), were killed during the battle, the majority as officers and serving in the 36th (Ulster) Division.

The British objectives for the offensive were bold; aiming at a breakout to push the Germans out of Belgium. Commander-in-Chief of the British Expeditionary Force (BEF), Sir Douglas Haig, wanted to advance up the Belgian coast to destroy U-boat bases at Ostend and Zeebrugge, both in German held territory. This had become important, as in February 1917, the Germans had started unrestricted submarine warfare, which threatened to starve Britain into submission.

The operation opened on 31 July with the BEF’s Fifth Army attacking east of Ypres, under the direction of Lieutenant General Gough. Initial progress was good; the attack on the left wing achieved its objectives but the assault on the left wing failed completely.

One of the first OCs to die was William Porter (1235), who was wounded on the opening day and died three days later from his injuries. Porter was a Lieutenant in the 2nd Battalion, Leinster Regiment and served along side OC Frank Hitchcock (1185).

Hitchcock wrote a famous memoir of his service with Moore that was published after the war. At age 21, Porter was the youngest OC to die during Third Ypres and he was one of the seven members of the CCB 1914 1st XV to die in the First World War.

The offensive ground on and constant preparatory shelling had churned the clay soil and smashed the agricultural drainage systems. A few hours into the battle, the weather turned and the heaviest rainfall for 30 years fell upon the battlefield. This turned the terrain into a swampy quagmire, producing thick mud that clogged up rifles, immobilized tanks and brought the initial operations to a halt.

On 16 August, the attack was resumed but with little effect. The 16th (Irish) and 36th (Ulster) Divisions were involved in this assault and the former suffered 3,600 casualties, and the latter, 4,200.

For Campbell College, Belfast, the legacy of Third Ypres is the 12 OCs who did not come back.
Only five of the 12 have a known grave, the other seven are commemorated on memorials to the missing. Four are remembered on the Tyne Cot Memorial and the other three on the Menin Gate memorial.

Three men from Castlerock Parish were killed during the Battle, and are remembered with honour on the War Memorials in St. Paul’s Articlave and Christ Church j n Castlerock.

Private George Madden, 10th Battalion Royal Inniskilling Fusiliers was killed on Friday 10th August. He was the son of Andrew Madden. He was married to Martha McCallion, and was the father of two children, Andrew and Annie. His body was never recovered. He is remembered with honour on the Menin Gate Memorial.

Private Hugh Butler Macauley, 10th Battalion Royal Inniskilling Fusiliers. He was the son of James and Elizabeth Macauley. He was killed on 16th August, aged 22. His body was never recovered and he is remembered with honour on the Tyne Cot Memorial.

Private Robert Keith, 1st Battalion Irish Guards. He was killed in action on 10th October; his body was never recovered and he is remembered with honour on the Tyne Cot Memorial.

The failure of the initial offensive led to Haig replacing Gough with Lieutenant General Plumer, Commander of the Second Army, in late August. Plumer changed British tactics and executed a series of limited objectives operations, known as ‘bite and hold’, that achieved significant progress. These assaults went on during September and October, once the weather had improved.

They included the Battles of Menin Road Ridge (20 September), Polygon Wood (26 September) and the Broodseinde (4 October). These resulted in British possession of the ridge east of Ypres. Subsequent attacks in October and November managed to push the British line into what remained of Passchendaele village, on Passchendaele ridge (this is where Tyne Cot cemetery is located today). The offensive was then called off.

To this day, the Third Battle of Ypres remains a controversial subject. Many people subscribe to the interpretation of the battle put forward by veteran historian, A.J.P. Taylor, that it was the ‘blindest slaughter in a blind war’.

More recently scholars have challenged this view. For example, Dr Nick Lloyd from King’s College London has suggested that Third Ypres was a ‘lost victory’ for the British. He argues the battle could have been won had the British played to their tactical and technological strengths, in the manner Plumer had done during the operations in September and October.