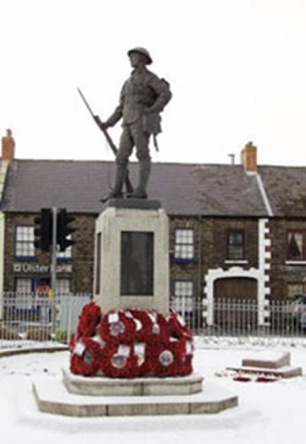 Alfred Taylor, an Irish international rugby player, who was killed on the first day of the Third Battle of Ypres is named on Comber and District War Memorial, Co. Down.

+TAYLOR, Alfred Squires
RAMC. Attached 10th/11th Bn. Highland Light Infantry. Captain. Died 31/07/1917. Age 29. Campbell College. QUB Faculty of Medicine 1906-1909. QUB Rugby Blue 1907 – 08. Edinburgh University where he graduated M.B., and Ch.B. in 1914. At Edinburgh he was president of the University Union and captain of the University rugby fifteen (1911-12). He played four times for Ireland between 1910 and 1912. He took a temporary commission as lieutenant in the RAMC on 12/10/1914, was promoted to captain after a year’s service and on 11/01/1917, took a permanent commission in the RAMC as lieutenant and temporary captain. He had earlier been invalided home from Mesopotamia. He returned to France with the Highland Light. He was dressing a brother officer’s wound in France , when both were killed instantly by the bursting of a shell. He was killed on the first day of 3rd Battle of Ypres.  Served in Mesopotamia from 1915 and in France from 1916. Killed in action at Ypres. Son of the Rev. David A. Taylor, D.D., of “Eastbourne,” Windsor Avenue North, Belfast. Ypres Town Cemetery Extension. Comber WM

+THOMPSON, Joseph Beckett
RAFVR. Sergeant. 566058. Died 31/07/1940. Aged 24. 25 Sqdn. He attended Lisburn Junior Technical High School before joining the RAF as an Aircraft Apprentice in September 1932. By August 1935, he passed out as a qualified fitter. In the following years, he undertook pilot training and gained his wings. At the outbreak of war in September 1939, Thompson served with RAF 25 Squadron at Northolt. He was one of “The Few” who perished during the Battle of Britain. He was the pilot of Bristol Blenheim Bomber L1408 and had taken off to test the Airborne Interception radar system. During the mission, his plane collided with Blenheim L6722 of RAF 29 Squadron over the Bristol Channel. Aircraftman EJ Toy and Mr DM Gordon, a civilian radar engineer from No 32 Maintenance Unit died on board Thompson’s craft. The occupants of the other plane; Sergeant E Waite, Sergeant CJ Richardson and Leading Aircraftman T Ward of No 32 Maintenance Unit were also lost. Born in Magheragall, Co. Antrim, he was the son of Thomas Thompson and Sarah Thompson. Magheragall Church of Ireland Churchyard, Co. Antrim. 502 (Ulster) Squadron WM, St Anne’s Cathedral, Belfast