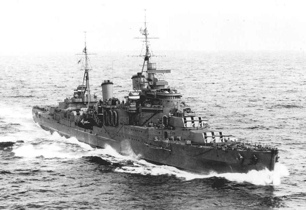 Interned in Algeria – Following the scuttling of HMS Manchester men from Belfast, Newtownards and Portadown were emprisoned by the Vichy government which collaborated with Nazi Germany and Fascist Italy. HMS Manchester (above) was taking part in Operation Pedestal whose aim was to force a convoy through to beleaguered Malta.

Of the 14 fast merchant ships involved in the operation during Aug 11-13, several were sunk and only five made it to the island. But their cargo was enough to ensure its survival as a base for operations against Axis convoys supplying Rommel’s Afrika Corps.

The Royal Navy suffered grievously. In addition to Manchester, the carrier Eagle, the cruiser Cairo and the destroyer Foresight were sunk, and the carrier Indomitable and cruiser Nigeria seriously damaged.

Manchester, a Gloucester class light cruiser, was serving in the East Indies with the 4th Cruiser Squadron at the outbreak of war, but was ordered home and arrived back Britain on 25/11/1939.

She subsequently served with the Home Fleet at Scapa on Northern Patrol duties, capturing the German merchantman Wahehe on 21/02/1940.

A cigarette is given to one of the wounded men, who had been working in a shell room when the torpedo hit the Manchester

After participating in the Norwegian campaign she was then based in the Humber for anti-invasion duties, but on 15/09/1940 sailed to the Mediterranean for Operation Collar and was present at the action off Cape Spartivento on 27/11/1940.

Manchester returned to Britain on 13/12/1940 and spent the first four months of 1941 under refit, then undertook Denmark Straits patrols during the Bismarck sortie.

In July 1942 she returned to the Mediterranean for an important Malta convoy, but on 23 July she was hit on the port quarter by an aerial torpedo and badly damaged. Temporary repairs were made at Gibraltar, and the ship then sailed for Philadelphia for complete repair. This was finished on 27/02/1942, after which she returned to Portsmouth, where final work was completed by the end of April.

On her return to service she joined the Home Fleet at Scapa Flow during the first week of May, then carried out Russian convoy cover duties and the reinforcement of Spitzbergen.

In August she returned to the Mediterranean for Operation Pedestal

However, on the night of 12/13 August 1942, Manchester was hit by a torpedo from either Ms 16 or Ms 22 off Tunisia and crippled. The aircraft carrier Eagle had already been sunk. In daylight there were ceaseless air attacks and at night submarines and motor torpedo boats followed up. It was a torpedo from an MTB, either Ms16 or Ms22, that struck Manchester in the early hours of the morning, when she was about 7 miles off the Tunisian coast.

Leading Stoker Albert Slater was in the engine-room when the torpedo struck home. He went through an ordeal which might have been the experience of any of the hundreds of men serving in the engine-rooms of other ships.

He was standing on some plates about 20 feet above the engine-room floor when the explosion plunged everything into darkness. He was blown off the plates, and only the water rushing into the compartment saved him from injury that would have made it impossible for him to get clear. The water carried him up, and there appeared to be nothing to stop his being drowned when the water reached the top of the compartment. Suddenly it ceased to rise, and Slater pulled himself on to a turbine where he sat in pitch darkness – half stifled by heat and steam.

A slight glimmer of light through some pipes gave him fresh hope, but he could not climb over the pipes without being badly burned, so he plunged into the water and came up at a point where the air was a little better. Groping along the deckheads he cut his hand on a broken lamp; but the lamp told him where he was. He went on until he found himself beneath an open hatch. He was pulled clear a few minutes before it became necessary to clamp down the hatch against the advancing waters. 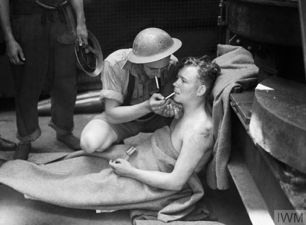 A cigarette is given to one of the wounded men, who had been working in a shell room when the torpedo hit the Manchester

When the Manchester sank three officers and 142 men were picked up, but only after some of them had spent several hours in the water.

It emerged that Capt Harold Drew, commander of the Manchester, decided to scuttle the heavily damaged ship, an action which cost him dearly, finishing his naval career when he was released from internment at the war’s end, and which hung over him for the remainder of his life.

Although three of her four engines were out of action and she has list to starboard, her guns were still working. Captain Drew was court-martialled for his actions although it could be argued that many of the crew survived because of his decision.

Drew’s action in abandoning the crippled ship was applauded by many of his crew, who believed the Manchester, drifting in waters dominated by enemy aircraft and submarines, was doomed to be sunk in any subsequent attack.

Of the 900 men on board, 500 were interned in Vichy French North Africa, and 400 were rescued by Royal Navy ships.

The evidence against Drew was rumoured to have been aided by one or more of his officers, rescued by British ships, who said the ship might have been able to limp to a friendly port. Drew was unable to defend himself immediately, having been interned by the Vichy French. His court martial followed his return to Britain months later.

The Admiralty insisted on a court martial which was held in camera and concluded that Drew had scuttled the ship prematurely. He was never given another command at sea, and died at the age of 92 in 1987, the stain still on his character. He never complained about his treatment in public, but his wife once said that it broke his heart. 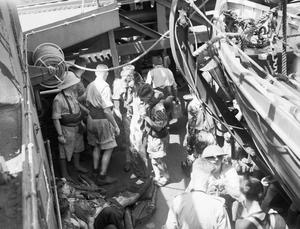 In 2002 a diving expedition was timed to coincide with the 60th anniversary of Operation Pedestal.

Crispin Sadler, a leader of the diving expedition, said he had seen an enormous hole in Manchester’s side around the aft engine compartment, and the shattered remains of the two propeller shafts. The ship, a war grave, is lying at a 45-degree angle in 250 feet of water three miles off Cap Bon. The divers attached a White Ensign to the wreck, presented by the crew of the current HMS Manchester, a Type 42 destroyer.

Mr Sadler said: “There was, I believe, some talk that Manchester might have been able to make anywhere between two and 12 knots. Well, there was not a chance in a million that she could have made 12 knots. You could have driven a car through that hole.”

Daphne Freeman, Capt Drew’s daughter, said her father never talked of the affair. “He was of the generation that did not complain. I believe that he approached A V Alexander, the First Lord of the Admiralty, and said he did not care about the court martial as long as he was not regarded as a coward.”

Allan Walker, chairman of the HMS Manchester Association, said his members regarded Capt Drew as a fine and brave man. The year before the cruiser’s sinking he brought her safely into port after she was crippled by an air-launched torpedo. “He always had the loyalty of the lower deck,” said Mr Walker. “His action saved his men.”

Peter Crockett, Capt Drew’s grandson and vicar of St Luke’s Church in Exeter, Devon, said: “He was very hurt by the way he was treated. I dont think he ever recovered.”