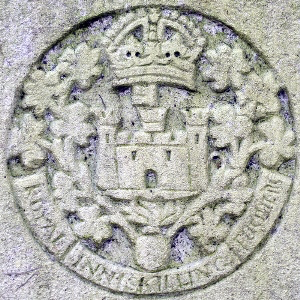 The battle produced tiny gains for the Allies and heavy casualties. Twenty-seven men associated with the city of Londonderry, and its immediate environs, lost their lives on that terrible day.

+ALLEN, George
‘B’ Company, 9th Battalion Royal Inniskilling Fusiliers (Derry Volunteers, attached to the Tyrone Volunteers). Private, 23847 Age 22. Fourth son of William and Rebecca (nee Wallace) Allen, 236, Bishop Street, and 10, Victoria Street, Londonderry. Reverend John Redmond, C.F., wrote a letter of condolence to Private Allen’s mother, stating: ‘I have heard Private Allen spoken of in the highest terms by officers, and he will be greatly missed in his company. He was a good soldier, brave and reliable in circumstances of danger. On the battlefield he was in the discharge of his duty faithful unto death, and what greater or nobler thing could be said of any man? He has given his life in a great and righteous cause, which is worthy of the sacrifice, and he did not die in vain. You have great reason to be proud of his memory.’ Brandhoek New Military Cemetery,West-Vlaanderen, Belgium

+CAIRNS, Robert
9th Battalion Royal Inniskilling Fusiliers (attached to the 109th Trench Mortar Battery). Private. 27944 Born Tirbracken, County Londonderry. Enlisted Londonderry. Son of Mr John Cairns, Tirbracken, Drumahoe. The Reverend J. G. Paton, chaplain, said in a letter to Mrs Cairns: ‘Your son was doing his duty bravely in the big battle on 16th August when he was hit by a shell and died immediately. He was a good boy and a brave soldier. He has given his life for home and country, and what better could any man do? His officers and comrades ask me to extend to you their heartfelt sympathy in your great loss. May God be with you and keep you at this time.’Tyne Cot Memorial, West-Vlaanderen, Belgium

+KELLY, Robert, (Bobbie)
9th Battalion Royal Inniskilling Fusiliers (Derry Volunteers, attached to Tyrone Volunteers).Lance Sergeant. 27250. Born Templemore, County Londonderry. Enlisted Londonderry. Age 21. Member of Ebrington / First Derry Presbyterian Church, Londonderry. Son of Robert and Ellen Kelly, Fountain Place / 18, Mountjoy Street, Londonderry. Major Muriel, Royal Inniskilling Fusiliers (Tyrone Volunteers), wrote to Lance Sergeant Kelly’s father at time of death informing him that his son was ‘a fine N.C.O. and will be a great loss to the battalion, as also to all his comrades. He died the death of a brave man, facing the enemy.’ Reverend John Redmond, C.F., wrote, ‘He was a brave man in face of great peril, and could be relied on in circumstances of difficulty. He was faithful even unto death in the discharge of his duty, and what greater or nobler thing could be said of any man? He is much missed both by the officers and men of his company. He has made the greatest sacrifice a man can make for a great and holy cause, and you have good reason to be proud of his memory.’

+TOSH, William James
Trench Mortar Battery, attached to 10th Battalion Royal Inniskilling Fusiliers (Derry Volunteers). Private, 16059. Age 40. Son of Mr Richard Tosh, Tamneymore, Derry. Private Tosh joined the Derry Battalion of the Royal Inniskilling Fusiliers in September, 1914, and went to France in October, 1915, with the battalion, taking part in all its engagements until he was transferred to the Trench Mortar Battery. He was in the employment of the Londonderry Bridge Commissioners prior to the war, and was a member of City of Derry Temperance Loyal Orange Lodge 1007 and Royal Black Preceptory 113. Private Tosh’s brother-in-law, Lance Corporal Thomas Curry, Inniskilling Fusiliers (Derry Volunteers), was killed in March 1916, and another brother-in-law, Robert Curry, who belonged to the 2nd Inniskillings, spent time as a prisoner in Germany from August 1914.