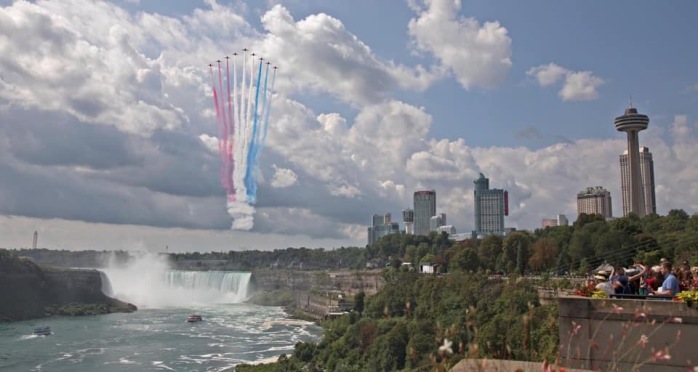 Red Arrows over Niagra. Remembered today with five others is Jack Sayers, former Editor of the Belfast Telegraph, a RN reservist who survived a sinking and later served in Churchill’s map room maintaining daily updates of WW2 forces’ deployments. The PM referred to him as “The Ulsterman with the card-index memory”.

+O’HARA, Henry Desmond
1st Battalion, Royal Dublin Fusiliers. Lieutenant/acting-Captain. DSO. Died 30/08/1915. Aged 23. He served on the Gallipoli Peninsula, Turkey. The 29th Division, which included the First Royal Dublin Fusiliers, was decimated in the First Battle of Krithia. By the end of day on 28/04/1915 the Fusiliers were down to only 374 men and one officer Lieutenant O’Hara. For his bravery and leadership during the battle, Lieutenant O’Hara was awarded the Distinguished Service Order. He was the only son of Mr. William T. O’Hara, R.M., Oriel House, Ballincollig, County Cork, and the Castle, Portstewart; the grandson of Rev. James Dunn O’Hara, of the Castle, Portstewart, and O’Harabrook, Ballymoney; and the nephew of Dr. O’Hara (Lord Bishop of Cashel). Gibraltar, North Front/Garrison Cemetery. IMR. (Coleraine Chronicle of 01/01/1916; Northern Constitution 11/09/1915

+CRAIG, Eric Erichsen
Royal Irish Rifles. Second Lieutenant. Died 30/08/1916. Age 21. Educated at Foyle College Londonderry where he played in the school’s XV rugby team and QUB where he read medicine 1915 – 16. His aspiration was to follow in his two brothers’ footsteps. At time of deceased’s death, a brother, Lieutenant F W Craig, medical superintendent officer of health for Londonderry, was at the Front with the RAMC while another brother, Lieutenant Alexander V Craig, RAMC, had served for a year on the Western Front. Eric joined the QUB Training Corps and in December 1915 received his commission in the Royal Irish Rifles. He went out to France on 18/07/1916 with the 16th Royal Irish Rifles (2nd County Down Pioneers) as part of 36 (Ulster) Division, mostly made up from Belfast and Lurgan based soldiers. He was killed in action instantaneously by a German trench mortar 43 days after arriving in France. He was the son of Dr James C and Matilda Spence Craig, Carlisle Terrace, Londonderry. A total of 70 former students of Foyle College lost their lives in WW1. His name and that of many of his first XV were among a list of Great War dead, associated with Foyle College, read aloud during the annual prize giving ceremony, held on Thursday19/12/1918. Interred at St Quentin Cabaret Military Cemetery, Belgium. Commemorated at the Diamond WM, Londonderry. Carlisle Road Presbyterian Church RH.

+CHAPMAN, George
1st Bn. Canadian Infantry. Private. 2448412. Died 30/08/1918. Age 31. Born in Belfast on 12/06/1887, he lived in Canada and enlisted in the Canadian army at Windsor, Ontario on the 12/06/1917, on his thirtieth birthday. A single man, he was a labourer by trade and had no previous military experience.  He was 5’8” tall, had a fair complexion, with blue eyes and brown hair. His chest measured 40” fully expanded with a 4” range of expansion. Son of Mrs. Prudence Chapman of Corcreeny, Hillsborough, Co. Down. Sun Quarry Cemetery, Cherisy, Pas de Calais, France

HMS Caroline. RNVR. Lieutenant Commander. Ulster Division 1911 -1969. Jack Sayers was the son of the editor of the Belfast Telegraph. He was in HMS Courageous on 16/09/1939 when it was torpedoed west of Ireland by a U boat. His name was not on the original list of survivors. A debate at Stormont, where his father was observing proceedings, was interrupted to confirm his safety. A few weeks later his father suffered a heart attack and died at his home on Kirkliston Drive on 15/10/1939.

Jack Sayers was educated at Methodist College, Belfast where he was Head Boy. On leaving school he followed his father into the Belfast Telegraph as a junior reporter. Over the next few years he covered anything and everything from meetings of Belfast’s Harbour Board to Collegians’ rugby matches in which he was playing (signing himself J S Edwards). On his father’s accession to the editorship in 1937, he became the parliamentary correspondent at Stormont. In 1937 he enlisted in the RNVR Ulster Division.

In November 1939, six weeks after the torpedoing of Courageous, he was recruited to Winston Churchill’s naval/military “map room” which had been set up by his friend and fellow Ulster Division RNVR officer, Richard Pim, a future head of the RUC. This was an extraordinary makeshift map room which moved with Churchill from Admiralty House to Downing Street. This was kept up to date day and night and gave precise information relating to the position of every British and Allied warship, of convoys, their speed, the numbers of ships involved, their escorts and the estimated position of any known enemy naval units at sea, together with full comparable military information. Here the course of the war was plotted. Sayers manned the room and was called by Churchill, “The Ulsterman with the card index memory”. The map room and its Ulster staff also travelled to conferences abroad including Newfoundland for the Atlantic Charter Meeting with President Roosevelt on HMS Prince of Wales, to Washington and Qubec, to Malta, Alexandria, Cassablanca, Marrakesh, to Yalta for the meeting with Stalin, and finally to the Potsdam Conference in 1945.

Shortly after the war in October 1945, Jack Sayers married a widow, Mrs Daphne Godby, and returned to Belfast where he was appointed political correspondent at the Telegraph then under the editorship of his uncle, RM Sayers. In 1953 he became the third member of his family to be editor of the Belfast Telegraph. He supported Terence O’Neill’s political vision. He retired on 17/03/1969, in poor health and disheartened by the turn of events. He died five months later on 30/08/1969.