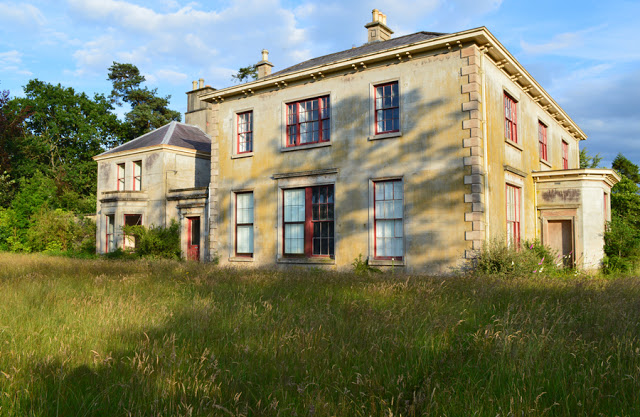 Amongst those remembered today is Gerald Ralph Auchinleck Darling, RNVR. Fleet Air Arm, Lieutenant-Commander. At the age of 18, he began an outstanding career in the RNVR, from 1940 to 1946, as a Fleet Air Arm pilot, later becoming Chief Test Pilot with the Mediterranean Fleet. A dangerous job and few of his colleagues survived the war. He himself crash-landed, suffering severe injuries including a smashed pelvis. He had a most successful law career in London post-war but he maintained Crevenagh, Omagh, Co. Tyrone (above) as his home.

+McGUFFIN, James
15th Battalion. Lancashire Fusiliers. Sergeant.11163. Died 13/09/1917. Aged 29. Enlisted in Salford, Lancashire. Son of Robert McGuffin and Margaret Cooke. Robert was born in Belfast at 76 Canmore St. on 18/04/1888. The family hailed from Dungannon. Zuydcoote Military Cemetery, near Dunkirk, France. (In the autumn of 1917, while the XV Corps was holding the Nieuport section, the 34th and 36th Casualty Clearing Stations were posted at Zuydcoote. Zuydcoote Military Cemetery, Zuydcoote, Nord, France).

RNVR. FAA. Lieutenant-Commander. At the age of 18 he began an outstanding career in the RNVR, from 1940 to 1946, as a Fleet Air Arm pilot, later becoming Chief Test Pilot with the Mediterranean Fleet. A dangerous job and few of his colleagues survived the war. He himself crash-landed, suffering severe injuries including a smashed pelvis. The prognosis was that he would never walk again but following the Greek motto on his aircraft, meaning “Know Thyself”, he characteristically defied all the odds, learning to ride again both horse and bicycle. He maintained his connection with the Navy through the RNVR, rising to the rank of Lieutenant-Commander.

Born 1921 in Erganagh Rectory where his grandfather Gerald was rector, he maintained his Northern Ireland connections throughout his life. Academically he was a high flyer. His first school was Omagh, then a scholarship to Harrow, and a classics scholarship to Hereford College, Oxford.

On the death of his father in 1958 he had inherited Crevenagh House, near Omagh, where, from his schooldays, he had spent many happy holidays with his extended family. He was proud of his descent from the Auchinleck family who had always lived there, and resolved to maintain it as a family home despite his ties to life in London. In his London office you would find a Donegal landscape and a map showing the wartime achievements of Ulster.

In 1990 he became Deputy Lieutenant of Co Tyrone and in 1993 High Sheriff. In his obsequies address Bishop Hannon of Clogher paid tribute to Gerald Darling’s contribution to the work of Edenderry parish, where he had served as parish secretary. In the townlands of Omagh his roots went deep. Bishop Hannon related how, before a major court appearance, Darling would ease the tension by thinking of his favourite spots on the river, the snipe bogs and mountains of Tyrone. Strangely, after a lifetime of trout-fishing, he caught his first salmon only a year before his death. One of his family remembers the fishing picnics in childhood – “as unfortunately a mizzly day is good for fishing the picnics were often rather damp affairs”.

But that was balanced by the warmth of bedtime stories in the family flat in the Middle Temple where it is said the family, willy-nilly, added to the appreciative audience for Darling’s dramatic readings of Winnie the Pooh. He would, friends say, have been equally at home as a farmer, taking great pride in his forestry and Belted Galloway cattle and never more at home than working in ragged jeans with his chainsaw.

A permanent record of Gerald Darling and his distinction as a lawyer will be his contribution to that definitive work, Halsbury’s Laws of England (Admiralty and Ship Collisions), the third edition of 1952. In 1992 he was made an Honorary Bencher of the Northern Ireland Bar.