HMS Courageous had an air group of 2 squadrons of Swordfish aircraft, 48 planes in total. Courageous was sunk off the Irish coast by U-29.

HMS Courageous was the lead ship of the Courageous-class cruisers. She was decommissioned after the end of WW1 and began reconstruction 29 June 1924 and completed 21 February 1928.

She was the first ship to be fitted with transverse arrester wires, this work being completed 2 January 1933.

She could carry 48 aircraft compared to the 36 carried by Furious. She briefly became a training carrier, but reverted to her normal role a few months before the start of the Second World War in September 1939. Courageous was torpedoed and sunk 17 September 1939 in the opening weeks of the war, going down with more than 500 of her crew. 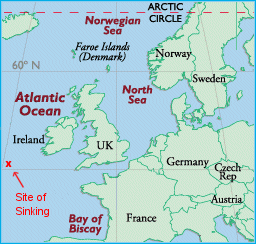 +CREE, James
RN. Able Seaman. D/SSX 27141. HMS Broadwater. Died 18/10/1941. Aged 21. On convoy duty in the Atlantic. He was a survivor of HMS Courageous when aged 19. (Belfast Weekly Telegraph 23/09/1939). He was injured in the evacuation of Dunkirk. He was hospitalised after the RN destroyed the greater part of the French fleet which was lying in Oran harbour. All this was before his 20th birthday.Son of William and Elizabeth Cree, Wesley St., Lisburn. Plymouth Naval Memorial, Panel 46. Lisburn WM

CREIGHTON, Harry
“Enniskillen Man on ‘Courageous’ – How he was Saved – Looking the picture of health, despite his harrowing experience, Mr. Harry Creighton, one of the survivors of HMS Courageous, arrived at his home at Belmont, Enniskillen, on Thursday, and was given a great welcome. Aged almost 19, Harry Creighton is the youngest son of Mr. W.H. Creighton, U.D.C., and Mrs. Creighton. Educated at Portora Royal School, he entered the Royal Navy this year. Following his training at Portsmouth he was moved to Devon-port and was drafted to the Courageous, an aircraft carrier, on 30th July last – only two months ago, and he was on this ship at the time of the King’s review of the reserve fleet. Harry is a fine swimmer, and this accomplishment stood him in good stead in his trying ordeal. He was a member of the Enniskillen Swimming Club, and, prior to leaving school, was captain of the Ulster House Swimming Club, in the summer term of 1938. On the Courageous he was a supply assistant. The Courageous was torpedoed by a German submarine on the evening of Sunday, 17th inst., and out of a crew of 1,260 men only 600 were saved.” – Impartial Reporter 28/09/1939. Belfast Weekly Telegraph 23/09/1939.

+McCAULEY, Henry
RN. AB. D/J35109. Served 1915 – 1939. Died 17/09/1939. Age 40. HMS Courageous. Enlisted and served throughout World War 1 in RN. 24 years service including the Battle of Jutland. Qualified for his pension in January, 1939, only to be called back to duty in August 1939. It was said that he had the biggest funeral in the area ever. He was one of the first men to be killed during World War II from the Ballyclare area. His brother James lost a leg at the battle of the Somme. Another brother Robert died during the 1914 -18 war and is commemorated on the Pozieres Memorial. Son of Robert and Mary A McCauley, Mill Lane, Ballyclare. (Belfast Weekly Telegraph 30/09/1939). Rashee New Cemetery, Ballyclare.

SAYERS, John E
HMS Caroline. RNVR. Lieutenant Commander. Ulster Division 1911 -1969. Jack Sayers was the son of the editor of the Belfast Telegraph. He was in HMS Courageous on 16/09/1939 when it was torpedoed west of Ireland by a U boat. His name was not on the original list of survivors. A debate at Stormont, where his father was observing proceedings, was interrupted to confirm his safety. A few weeks later his father suffered a heart attack and died at his home on Kirkliston Drive on 15/10/1939.

Jack Sayers was educated at Methodist College, Belfast where he was Head Boy. On leaving school he followed his father into the Belfast Telegraph as a junior reporter. Over the next few years he covered anything and everything from meetings of Belfast’s Harbour Board to Collegians’ rugby matches in which he was playing (signing himself J S Edwards). On his father’s accession to the editorship in 1937, he became the parliamentary correspondent at Stormont. In 1937 he enlisted in the RNVR Ulster Division.

In November 1939, six weeks after the torpedoing of Courageous, he was recruited to Winston Churchill’s naval/military “map room” which had been set up by his friend and fellow Ulster Division RNVR officer, Richard Pim, a future head of the RUC. This was an extraordinary makeshift map room which moved with Churchill from Admiralty House to Downing Street. This was kept up to date day and night and gave precise information relating to the position of every British and Allied warship, of convoys, their speed, the numbers of ships involved, their escorts and the estimated position of any known enemy naval units at sea, together with full comparable military information. Here the course of the war was plotted. Sayers manned the room and was called by Churchill, “The Ulsterman with the card index memory”. The map room and its Ulster staff also travelled to conferences abroad including Newfoundland for the Atlantic Charter Meeting with President Roosevelt on HMS Prince of Wales, to Washington and Qubec, to Malta, Alexandria, Cassablanca, Marrakesh, to Yalta for the meeting with Stalin, and finally to the Potsdam Conference in 1945.

Shortly after the war in October 1945, Jack Sayers married a widow, Mrs Daphne Godby, and returned to Belfast where he was appointed political correspondent at the Telegraph then under the editorship of his uncle, RM Sayers. In 1953 he became the third member of his family to be editor of the Belfast Telegraph. He supported Terence O’Neill’s political vision. He retired on 17/03/1969, in poor health and disheartened by the turn of events. He died five months later on 30/08/1969.