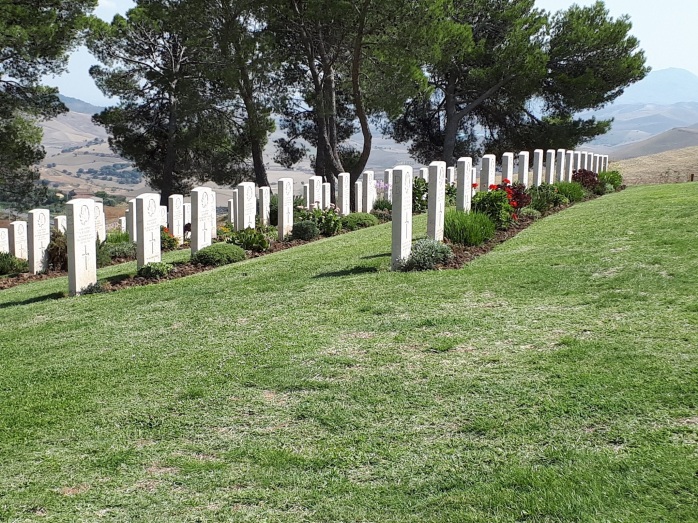 Agira Canadian War Cemetery, Italy. Men from NI served with Canadian forces in both World Wars. One from each war is remembered in today’s Roll. An infanteer from Larne is named on the Vimy Memorial. A Royal Canadian Air Force Flight Sergeant from County Antrim rests in Coburg, Ontario.

+BROWNE, William Angus
Royal Inniskilling Fusiliers, 8th Battalion, attached Royal Flying Corps. 53rd Squadron. Lieutenant. Reported missing in action on 21/09/1917. He was killed on that date. Age 24. Originally formed at Catterick on 15/05/1916, it was planned to use 53 Squadron as a training squadron, but in the December of that year it was sent to St Omer in France in the Corps reconnaissance role. The Squadron operated BE2Es until April 1917, when  these were replaced by RE8s, which it continued to use for the remainder of the war.  William Angus Browne attended the Belfast Municipal Technical Institute to do an engineering course and on 01/09/1914 he joined QUB OTC. He was the younger son of William and Eleanor Browne, Tubber-na-carrig, Kircubbin and Agincourt Avenue, Belfast. He was buried at Post – du – hem military Cemetery, La Gorgue, Nord, France. Commemorated in Kircubbin Parish Church (Holy Trinity) and family grave headstone in the adjoining graveyard. Two of his sisters named their sons after him. James Hawks Stokes and Helen Lyle Stokes (nee Browne) had a son they named William Angus Bartlett Stokes (named after William Angus Browne) and he was killed in the Second World War.  Flying Officer (Wireless Operator/Air Gunner) William Angus Bartlett Stokes (No. J/18752) served with 295 (RAF) Squadron in the Royal Canadian Air Force and he was 24 when he died on 11/06/1943.  He was buried in Heanton Punchardon (St. Augustine) Churchyard, Devon. John Boyd Iliff and Emily Davidson Iliff (nee Browne) had a son they named William Angus Boyd Iliff (named after William Angus Browne) and he was knighted by the Queen in 1961.