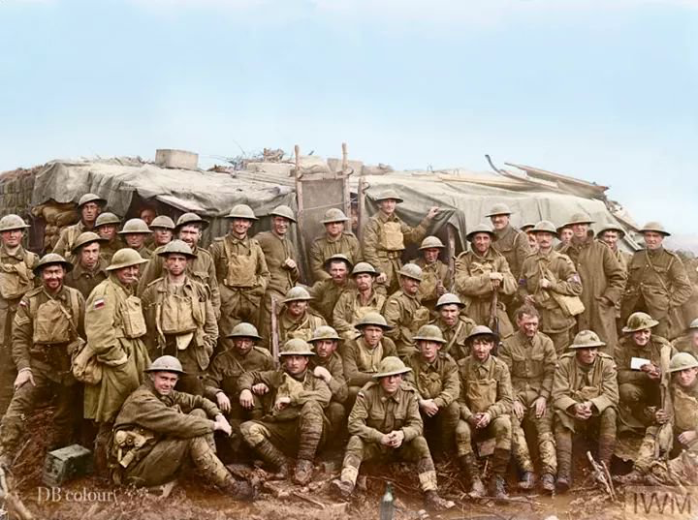 Assault on Passchendaele 12 October – 6 November 1917: Most of the men (about forty only) left in the 8th Australian Battalion after the opening push of the second battle of Passchendaele. RH 26 October 1917. One of the Australians who died on this date was born in Moy. William Allen had previously served with the Royal Irish Fusiliers.

+CLELAND, James
Died 27/10/1916, at his residence, Fountain-street, Downpatrick, James Cleland, late Regimental Sergeant-Major of the 9th Batt., Royal Inniskilling Fusiliers (Tyrone Volunteers). Like his father, James served in the Munster Fusiliers. Afterwards he was engaged at Strabane as a U.V.F. drill instructor. On the outbreak of hostilities he became sergeant-major in one of the Inniskilling battalions of the Ulster Division. But the hardships endured on the western front in the winter of 1915-16 broke down his health. He left a wife and six children. This was the second time for his wife to be widowed. Her former husband, also a soldier, was killed in the Boer war.

+ALLEN, William
Australian Infantry, A.I.F. 2nd Bn. Private. 2345. Died 27/10/1917 at Ypres. Age 28. Born in Moy. William Allen had previously served with the Royal Irish Fusiliers for two years before emigrating to Australia when he was 23 years old. He worked as a labourer before enlisting with the Australian Infantry in May 1915. Son of Mrs. A. Allen, of 39, Carlton St., Portadown. Belgian Battery Corner Cemetery, West-Vlaanderen, Belgium. Moy WM

+CAMPBELL, Robert Thomas
Canadian Army Medical Corps. 11th Field Amb. Private. 531709. Died 27/10/1917. Born on 14/01/1889 at Legane, Aughnacloy. By 1911 Robert had emigrated to Canada. He was a resident at Robertson College. Robert’s enlistment papers of 06/03/1916 state his next of kin as his brother James. He gives his Trade as a Druggist’s Assistant. He was 5′ 8″ tall. He had previously served in the University of Alberta Canadian Officers’ Training Corps (COTC). Nine Elms British Cemetery, West-Vlaanderen, Belgium. Dungannon WM

+GLENNIE, John Gordon Collings
Royal Irish Fusiliers, 1st Bn. Lieutenant. 268966. Died 27/10/1943. Aged 20. Lieutenant Glennie was shot in the arm when he and his close friend Lawrie Franklyn-Vaile were caught in an exposed position during the Faugh’s unsuccessful attack on Salvo on 27 October. After dressing Glennie’s wound, Franklyn-Vaile was trying to get him back to the rear when Glennie was hit by machine-gun fire in the chest. Trapped by machine-gun fire, Franklyn-Vaile stayed with Glennie until he died 90 minutes later. Son of John S. and Dorothy F. Glennie, of Enniskillen, Co. Fermanagh. Sangro River War Cemetery, Sangro, Chieti, Italy

“George Bradshaw was born in Belfast in 1887. His family had a distinguished lineage but, after an unhappy childhood, he was sent off at the age of 15 to Dartmouth for Naval training. He elected to join the fledgling Submarine Service and served as a submarine commander with distinction during the First World War, winning a D.S.O. for the sinking of U-boat UC-43, whilst in command of submarine G-13.  He also claimed to have sunk the mercantile submarine, the Bremen, sister ship of the famous Deutschland, but officially the fate of the Bremen is unknown.  However, his career in the Navy ended messily.  Just a few days after hostilities ended in November 1918, Bradshaw was in command of submarine G-11, when it was lost on the coast of Northumberland in thick fog, with the loss of two lives.  This was probably due to equipment failure, and, certainly, Bradshaw was not responsible for the loss of a further submarine under his command, K-15, in 1921, when, due to a design fault, it sank in the tidal basin at Portsmouth whilst he was on leave, but, nevertheless, he was court-martialled.” From “George Fagan Bradshaw, Submariner and Marine Artist” – by David Tovey.

After his discharge from the Navy in 1921, he settled in St Ives in order to pursue his great interest in marine painting. There he met his vivacious wife, Kathleen, at the Simpson School of Art, where he was appointed Assistant, and he became a stalwart of the art colony until his death in 1960. Husband to Katherine Marion Slattery, Salisbury, Rhodesia. Died 27/10/1960, St Ives, Cornwall. ADM196/51