A Naval Reserve officer who had played rugby for Inst and Malone and two Royal Marines from Northern Ireland serving in an elite Commando died in HMS Fidelity which perhaps is the vessel with the rarest background in World War 2. HMS Fidelity was the title given to a French ship called Le Rhin or Le Rhone.

The naval officer was William Bell White. The Marine commandos were William Joseph Bradley from Londonderry and John Francis Kelly from Armagh.

The vessel was originally staffed by French officers. The skipper was Costa, a Corsican. The second in command was a woman. The crew was a mixed bag of French, Belgium, Arabs and anyone else the chief officer could lay his hands on. Costa had already got rid of many of its original crew as he only wanted personnel that would fight against the Germans and Axis armies.

One example of this is that of a French plane that crashed into the sea near Gibraltar. Costa went out rescued the pilot and co-pilot and they became members of Le Rhone’s crew.

The ship had arrived at Gibraltar from Indo-China, with a totally mixed cargo, as well as a top-secret explosive. The explosive was code-named ‘Plastic’ that had been smuggled out of France and that Costa was to bring to England.

Eventually, the Royal Navy in Gibraltar gave permission to let the Rhone sail to England. When they left Gibraltar for England. In June 1940 Le Rhin sailed under the command of Lieutenant de Vaisseau Claude Andre Michel Peri, and was turned over to the Royal Navy at Barry Docks, South Wales.

Whilst here Costa handed over the Plastic, and through his negotiations was able to persuade the Royal Navy and the British Government to agree to the crew and the ship to become part of the British Navy and so HMS Fidelity was born. She was converted to a Q ship. In this role, the ship frequently changed identity to carry out its missions. On one occasion she actually sailed past the vessel she was pretending to be.

HMS Fidelity was a merchant ship or freighter. The 2,456-ton ship was built by H & C Grayson Its, of Garston, Liverpool, and completed in 1920 for Compagnie de Navigation Paquet, Marseilles. Now that the ship was part of the Royal Navy it meant that the crew had to have British names or ‘noms de Guerre’, Costa became Langlais, Madeleine Guesclin became Barclay, and Soigné was re-branded as Pat O’Leary. HMS. Fidelity would also be the only ship that would have the only sea- serving female officer (Madeleine Guesclin/Barclay) under the White Ensign.

Fidelity went into dry dock and was overhauled and armaments fitted and became a special service vessel, a ‘Q’ ship. She was commissioned on 24/09/1940 as HMS Fidelity (D57) under the command of Lt. Peri, serving as Lieutenant Commander Jack Langlais RNVR. Her officers included Lt-Cmdr. Patrick Albert O’Leary RNVR and First Officer Madeleine Barclay WRNS.

In 1941 Fidelity operated off the coast of Southern France under the direction of the Special Operations Executive (SOE). Her roles were to sail to the French coast and drop of and pick up personnel on clandestine and secret missions as well as picking up escapees and return them to England.

HMS Fidelity’s role was in clandestine operations on behalf of the SOE in the Western Mediterranean and it was while he was in charge of a skiff launched from Fidelity on 25/04/1941 in an operation coded “Operation Fidelity” that O’Leary was nearly drowned whilst landing two agents. Captured by Vichy coastguards, O’Leary presented himself as a French Canadian airman and was then imprisoned in the British internment camp at St Hippolyte du Fort near Nimes. From here he escaped to form the Pat O’Leary escape line, giving clandestine war history an interesting account of his activities.
It was a hard life for the crew as during these sorties in the middle of the night they would have to repaint the ship and make modifications to make it look like a Spanish or a Portuguese freighter.

In 1942 Fidelity was refitted to operate as a commando carrier for operations in south-east Asia. She was armed with four 4-inch guns, four 21-inch torpedo tubes, and carried two OS2U Kingfisher floatplanes, the motor torpedo boat MTB-105, and the landing craft HMS LCV – 752 and LCV – 754.

Whilst on training exercises in Scotland, Lieutenant Tod RM, was summoned to London for a special briefing. On his return to Scotland he was to handpick, only the best Officers, NCOs and men and these Marines would form ‘T’ Company 40 Royal Marine Commando.

They assembled on 23/04/1942. As a group they were never to return to the main unit of the Royal Marines. They went for specialist training and the name ‘T’ company was never to reoccur in 40 Commando’s War Diary.

‘T’ company trained all over Scotland and in May 1942 moved down to Penally near Tenby.

In June 1942 ‘T’ company became officially part of HMS Fidelity. This the Corsican Langlais had always wished for and had persuaded the Admiralty to act in his favour to assist in his master plan.

Memorial to the ranks of 40 Commando RM including those of ‘T’ Company, who lost their lives when HMS ‘Fidelity’ was sunk by German U Boat 435 on 30 December 1942. There is also a Memorial in St. Andrew’s Church, Chale, Isle of Wight.

The Marines then moved to their final training ground on the Isle of Wight with the address Chine View Cottage, Chale. They slept under canvas, two marines sharing a one-man tent and they also had to provide for themselves.  Now they became part of Langlais’s plan and training was intense. Barclay, an explosives expert, also trained with the men.  By this time Fidelity was refitted, and now had two landing craft, two motor torpedo boats, and two aircraft, as well as bristling with all manner of guns and explosives.

Time was short and soon the men embarked on their fateful mission following out with a convoy.

In December 1942 Fidelity, with T Company, 40 Commando aboard, joined Convoy ON 154 which was bound for Colombo, India. The convoy was attacked by German U-boats from 27th December while north of the Azores and soon many merchant ships were being sunk by the U-boats. The rescue ship was one of those sunk and so Fidelity was requested to assume that role. However, Fidelity, suffering from engine problems, was left behind by the convoy. She was ordered to make for Gibraltar.

On 30 December at 1638hrs, she was torpedoed and sunk by U-435 under the command of Siegfried Strelow with the loss of 274 crew, 51 Marines and 44 survivors from SS Empire Shackleton. The only survivors were the eight crew of a motor torpedo boat, detached on anti-submarine patrol, who were later picked up by HMCS Woodstock (K238), and two crewmen of a seaplane that had crashed on takeoff on 28 December and been picked up by HMCS St. Laurent (H83).

Fidelity Will Haunt Me ‘Till I Die, by Peter Kingswell. This book has been reprinted and is obtainable from The Royal Marines Historical Society.

+BRADLEY, William Joseph
RM. Marine. PLY/X 3580. Died 01/01/1943. Age 22. HMS Fidelity. Son of  Mr and Mrs John Bradley, Queen St., Londonderry. He was reported missing in March last and his parents were informed officially that “it has become necessary to presume his death”. Aged 22 and unmarried he joined the RM at the outbreak of war and had been serving with a Commando unit. Before the war he had been in business in London, having been previously in the employment of the Northern Counties Hotel, Londonderry, with his father who was a member of staff of the American Red Cross Club. (Belfast Weekly Telegraph 09/04/1943, Derry Standard 03/09/1943). Plymouth Naval Memorial Panel 83

+WHITE, William Bell
RNR. Lieutenant – Commander (E). RD. MiD. Died 01/01/1943. Age 42. HMS Fidelity. RBAI. Malone RFC. Earlier he was in a ship torpedoed in the North Africa landings and he was mentioned in despatches for efficiency and devotion to duty on that occasion. Served an apprenticeship with Harland & Wolff, joined P & O and whilst with the latter held a commission in the RNR. Second son of Commander William Bell White, RD, RNR. and of Amalia Bell White; husband to Lilli Bell White, Christchurch, Hampshire. (Belfast Weekly Telegraph 15/10/1943). Portsmouth Naval Memorial, Panel 79 Lieutenant – Commander White was an uncle of Dr. Dennis White of Dunmurry who kindly responded to remembrance ni inquiries. 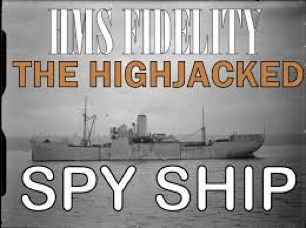