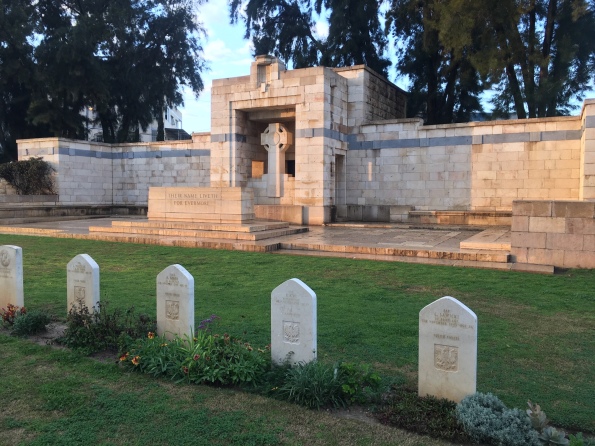 Company Serjeant-Major Scott of the Royal Irish Rifles, 14th (Young Citizens) Btn. kept a diary during the Great War. One entry consisted of the names of the ten men who were killed in the fighting at Authuile, near Martinsart. When he went home to Finaghy on leave later in the year he visited as many of the families of these men as he could find at the time. Sadly he did not survive to return to find those remaining on his list. Photo – Gaza War Cemetery.

+SCOTT, James
Royal Irish Rifles,14th (Young Citizens) Btn. Company Serjeant Major. 14/15892. Died 22/01/1917 in action at Messines in West Flanders. Aged 35. The battalion was raised in September of 1914 from the Belfast Volunteers, and after training, they joined the 108th Brigade, 36th (Ulster) Division. The division was formed from the Ulster Volunteer Force, such formation noted as being complicated due to the tension around the issue of Home Rule. The battalion landed at Boulogne in October of 1914 on their way to Arras, and later on to the trenches in the front line north of the River Ancre near Albert. They suffered heavy casualties on the first day of the Battle of the Somme in 1916.

Serjeant-Major Scott had joined the army at a very young age, convincing the recruiting officer he was several years older – and getting away with the untruth as did many underage boys years later at the outbreak of the Great War. It is known that he was involved in the fighting in the Second Boer War, 1899-1902.

One of the entries in the diary Serjeant-Major Scott kept for 1916 during the Great War consisted of the names of the ten men who were killed in the fighting at Authuile, near Martinsart. When he went home on leave later in the year he visited as many of the families of these men as he could find at the time, and sadly did not survive to return to find those remaining on his list.

+McLEISH, Peter
Irish Guards, 3rd Btn. Private.10195. Died 22/01/1918. Aged 20. Peter McLeish was the youngest son of James and Edith McLeish. Peter was born in Benburb, County Tyrone about 1899. His father was a gamekeeper who was born in County Wicklow. His mother was from County Armagh. By the time of the 1911 census, the family had moved to live in Irishtown, Straffan, County Kildare. Browns Copse Cemetery, Roeux, Pas de Calais, France

1879 – On this day, the Battle of Rorke’s Drift – British garrison of 150 holds off 3,000-4,000 Zulu warriors. Eleven Victoria Crosses and a number of other decorations were awarded to the defenders.

On This Night 22nd Jan 1917 – HMS Simoom an R-class destroyer was torpedoed and badly damaged in the North Sea by SMS S50 ( Imperial German Navy Destroyer). 44 of her 82 crew were killed. The survivors were rescued by HMS Morris and the wreck sunk by a torpedo from HMS Nimrod