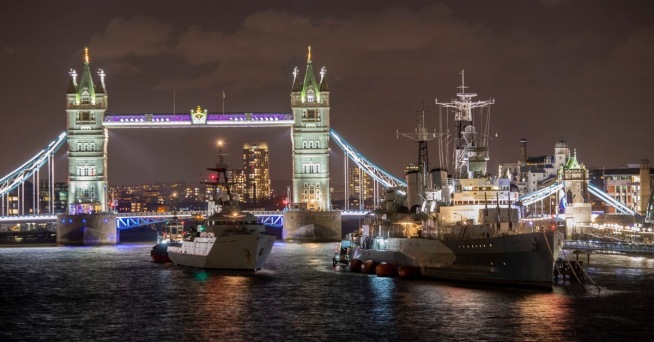 A beautiful sight on a winter’s night – HMS Tyne berthed in the Pool of London alongside HMS Belfast. In the Roll today a Cookstown man who served in Exter at the Battle of the River Plate but died later in the war and whose memorial is on Malta.

+FREEMAN, William Hugh
RN. Blacksmith. HMS Leonian. Died 07/02/1944. Age 23. Joined the Royal Navy in the summer of 1938, serving on HMS Exeter. which played a heroic part in the battle with the ‘Pocket’ Battleship Graf Spee off the River Plate on 13th December 1939. On the morning of 13th December, shortly after 6am AB Freeman was lying on deck when the order came for “action stations”. Distant guns flashed and soon HMS Exeter had received her first baptism of fire. Freeman was a member of the crew of one of the 4.7 inch guns that returned fire until the gun itself was disabled by a hit that killed and wounded many men, a piece of shrapnel cutting a hole in Billy’s cap and a slight cut to one hand. While serving on board HMS Exeter, Billy served with 14 men from Northern Ireland as well as men from the Republic of Ireland.

Prior to the war young William worked with his father as a Blacksmith and was a keen motor cyclist, having taken part in the Cookstown 100 motorcycle race in 1938. He arrived home on leave on 2nd March 1940 for 28 days to visit his parents in Cookstown. It is recorded that there were very enthusiastic scenes in Cookstown when he stepped of the bus from Belfast at the Transport Board’s parcel depot in William Street where he was surrounded by a large crowd of well-wishers. That evening he was met by the members of Killymoon & Derryloran bands and paraded to his home carried on the shoulders of some of his neighbours. There was much loud cheering and Billy Freeman was heard to say “I hope I live to see Hitler scuttle himself too”. Son of William Hugh & Mary Freeman, Church Street, Cookstown. Husband to Iris Elvina Freeman, Devonport. Billy Freeman joined the Royal Navy in the summer of 1938. Cupuccini Naval Cemetery, Malta. Cookstown WM

+NELSON, John Frederick
RAFVR. Sergeant (Flight Engineer) 1796160. Died 07/02/1944. Aged 21. RAF 1663 Heavy Conversion Unit. He was on board Handley Page Halifax DK192 OO-N that came down on Garrowby Hill, Bishop Wilton Wold, North Yorkshire. The crew took off from RAF Rufforth, North Yorkshire on a daytime training flight. The Mark V plane came down in low cloud around 1015hrs killing 7 of the crew and one civilian after hitting the summit of Garrowby Hill. After the impact, the plane crossed a road near Painsthorpe Farm before catching fire. A milk lorry traveling on the road became involved in the accident. The driver, Arthur Wood Kirkby, from Hill, Yorkshire died as a result. He was 39 years old and served in the Home Guard as well as working for the London and North Eastern Railway. Officers and men of the Royal Air Force acted as pallbearers at John’s funeral service on 14/02/1944. The Reverend Robert Anderson of Richview Presbyterian Church, Belfast, led the services at the family home and by the graveside before a trumpeter sounded ‘The Last Post’. He was the younger son of John and Dorothy Louise Nelson of 206 Roden Street, Belfast. Belfast City Cemetery

The 36th (Ulster) Division are now back together on this day in 1916. The Ulster Division took over the front from the river Ancre (Hamel) on the South, to the Serre Road, North of Auchonvillers on the North. The 107th Brigade rejoins the Ulster Division from the 4th Division