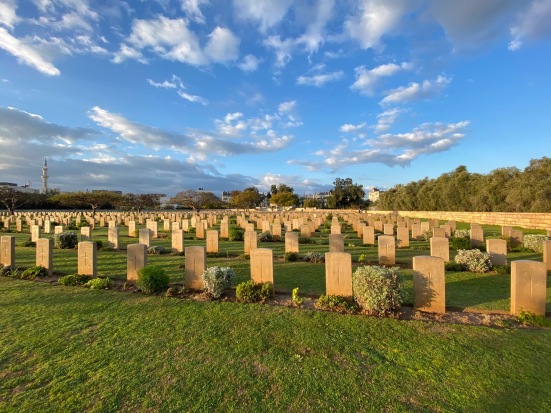 Gaza War Cemetery early this morning. 16/02/2020. Today’s Roll details eight NI men who died at the fall of Singapore, three of them were survivors from the Royal Navy ships of the ill-fated Force Z. This is the anniversary of a massacre of Australian nurses retreating from Singapore. Today’s veteran is another Queen’s doctor, William McMeekin Chesney, from Ahoghill who served in both World Wars. He was awarded the MC and Bar in WW1.

Singapore was the major British military base in South-East Asia and was nicknamed the “Gibraltar of the East”. The fighting in Singapore lasted from 8–15 February 1942. HMS Sultan was the title of the RN shore base at Singapore. In addition Force Z had been despatched to the area, comprising HMS Prince of Wales and HMS Repulse. Some of their survivors from the sinking on 10/12/1941 were in HMS Sultan.

+BOYD, David Wilson
RM. Marine. PLY/X10030. Force Z. A member of the Royal Marines detachment in the battleship HMS Prince of Wales which was sunk by Japanese aircraft off the Malayan coast on 10/12/1941 together with the battlecruiser HMS Repulse. Having survived that tragedy, Marine Boyd died 16/02/1942 during the battle for Singapore. Age 21. Listed as missing, presumed dead, during the evacuation of Singapore. Husband to Charlotte Boyd, Belfast. Plymouth Naval Memorial, Panel 102

+PRESTON, William
HMS Caroline. RNVR. AB. P/UD/X1509. Died 16/02/1942. Age 26. HMS Grasshopper (T85) which was a Dragonfly-class river gunboat. She was launched in 1938 and sunk, together with her sister-ship HMS Dragonfly, by Japanese forces south of Singapore on 14/02/1942 with heavy loss of life. A Reservist in HMS Caroline, he went to sea just before the war. His brother Samuel was serving in the Middle East with the RAF. Sons of Agnes Preston, Velsheda Pk., Belfast. (Belfast Weekly Telegraph 17/04/1942). Portsmouth Naval Memorial

The Prince of Wales was completed by Cammell Laird Shipbuilders of Birkenhead in March of 1941 and whilst not fully operational was sent into action with the Bismarck in May. After battling with and causing damage to The Bismarck the PofW herself was damaged and sailed home for repairs, during June and July of 1941. Once repairs were completed in August the PofW conveyed Prime Minister Churchill and his staff to meet President Roosevelt off the coast of Newfoundland to sign the Atlantic Charter. Around the third week of September,  the PofW joined Force H in Malta on Operation Halberd before returning home. On October 25th the Prince of Wales left the Clyde with Repulse for Singapore via the Cape of Good Hope and arrived on the 2nd December. On the 10th December with Repulse, she was sadly sunk following a torpedo attack by Japanese aircraft. Robert along with others who survived the sinking was taken to Singapore and assigned to HMS Sultan Naval Base. Then followed the Fall of Singapore to the Japanese.

+NUGENT, Francis P
318th Infantry Regiment (US Army). Corporal. 32158331. Died 16/02/1945. Francis P Nugent was born in America. Both his parents were Irish. He came home when he was four years old and spent his childhood in Pomeroy. Francis Nugent returned to America. He enlisted in New Jersey. He served with the 318th Infantry Regiment, 80th Infantry Division of the 3rd United States Army. Francis had discharged himself from hospital after he was wounded the first time so that he could go and fight again, and that was when he was killed. Corporal Nugent was awarded the Purple Heart which was adorned with an oak leaf cluster to show he was wounded in battle twice. Luxembourg American Cemetery, Luxembourg

CHESNEY, William McMeekin
William McMeekin Chesney, MC, and Bar, MiD, was studying medicine at Queen’s University (and living at 23 India Street) when he joined the Officers’ Training Corps on 03/11/1911. He remained a member of the OTC until he graduated from Queen’s with a medical degree in 1914 and received a commission in the Royal Army Medical Corps (Special Reserve), being attached to the 14th Field Ambulance. In early June 1915, he was Mentioned in Despatches and, on 22/06/1915, he was awarded the Military Cross for conspicuous gallantry during fighting in the Ypres Salient in Belgium. At the time, William Chesney was in charge of a Dressing Station located in the Irish Benedictine Convent, which was destroyed during the bombardment. Throughout the action, Chesney was impressed by the quiet unassuming bravery of the nuns which “… steadied me up like a tonic …”.

During the war, William Chesney was wounded on two separate occasions and, in November 1917, the London Gazette announced that he had been awarded a Bar to the Military Cross. He was promoted to the rank of Major in May 1918 and after the armistice in 1918, he served as part of the Army of Occupation in Germany. He also served in India before retiring from military service in 1921 to take up General Practice in Birmingham.

In 1945, after his second retirement from military service, William Chesney returned to general practice until his retirement, at the age of 70, in 1963. He died on 16/02/1979, at the age of 86. His obituary in the British Medical Journal (24/03/1979), stated that he left behind a “reputation of service, erudition, courage, and honour which few could hope to emulate.” William McMeekin Chesney was related to General Francis Rawdon Chesney FRS FRGS, a famous British explorer and engineer, who had demonstrated the feasibility of a canal across the isthmus at Suez. He was also connected with two Antrim men who were very successful in Australia – Sir Charles Wilson and his nephew, Sir Samuel McCaughey (1835-1919). Fitzroy Avenue Presbyterian Church War Memorial, First Ahoghill Presbyterian Church RH

Over 5,000 Australian nurses aided the sick and wounded during the Second World War. As Singapore fell to the Japanese, the Allied Forces evacuated by ship. Ships left Singapore carrying Australian Army nurses, injured service personnel and civilian men, women, and children. Two ships were bombed by Japanese aircraft and sunk. Some of the survivors washed ashore onto Bangka Island where they attempted to surrender to the Japanese. What followed was a massacre; 22 Australian Army nurses and 60 Australian and British soldiers and crew members were marched into the sea and killed by machine-gun fire as they stood waist-deep in the surf.

Only one nurse survived the massacre. Sister Vivian Bullwinkel was taken as a prisoner of war and returned home to Australia after the war. She later gave evidence at the Toyko War Crimes Tribunal in 1947.