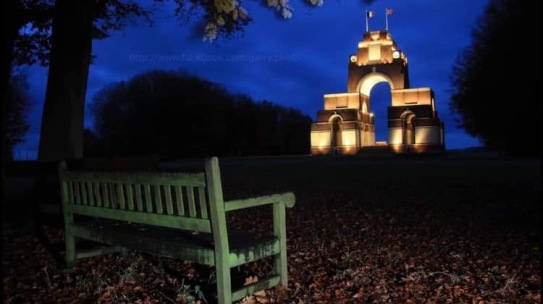 Nine fatalities from HMS Bayano torpedoed in 1915 are buried in N Ireland whilst NI men fell in the Battle of Neuve Chapelle. A decorated army chaplain from Fintona died doing his duty in 1917. Seven servicemen from WW2 are remembered. Photo – Theipval by night.

+ROSS, Robert
Royal Irish Rifles, 1st Btn. Lance Corporal. 9323. Died 11/03/1915 at the Battle of Neuve-Chapelle. Robert was the son of Robert and Julia Ross. He was born in Dundalk about 1886. By 1901 the family was living in Castleblayney, County Monaghan. His father was a Railway Station Master for the Great North Railway. Robert worked at Gunning’s Factory at Millburn in Cookstown. He enlisted in Belfast. Le Touret Memorial, Pas de Calais, France. Cookstown WM, Gunning’s Factory Memorial

+McDOWELL, William
Leading Seaman. 211344. HM Submarine E5. Died 11/03/1916. Age 33. E5 was lost on 07/03/1916 while rescuing the survivors of trawler Resono just north of Juist in the North Sea, apparently striking a mine, possibly after straying into a German minefield upon being sighted by the German light cruiser Regensburg. Others have attributed her loss to depth charge attack by torpedo boats escorting the battlecruiser Seydlitz. Born Templecorran, County Antrim. Son of Eliza McDowell, of Milebush, Ballyhill, Carrickfergus, and the late William McDowell. Portsmouth Naval Memorial. Carrickfergus WM

+ DUNCAN, Edward Francis
Chaplain to the Forces, 4th Class, attached to 103rd Infantry Brigade. MC. He was killed on the battlefield on 11/03/1917. Age 32. Ordained 1907. Instituted 1914 as rector of Kilflyn. Kilflynn Church was attended by the workers from the Castle Oliver estate. Son of John and Anna Duncan of Fintona, Co Tyrone, and husband to Jane Caroline Duncan of Carrick-on-Shannon, Co Leitrim. He is mentioned in “The Flag: Revd D Railton MC and The Tomb of the Unknown Warrior” by Andrew Richards (Page 34). Railton was chaplain to the Northumberland Fusiliers and they would become good friends over the period they ministered together. Faubourg d’Amiens Cemetery, Arras. Memorial in the churchyard of Kilflynn, Ballyorgan, Limerick.