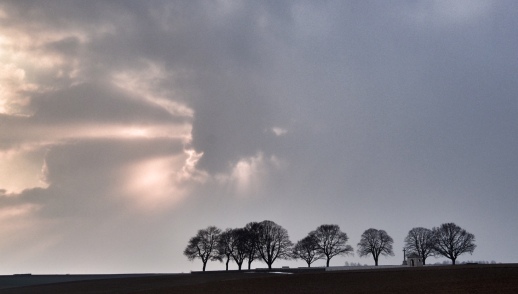 Three WW1 named on today’s Roll had links with India. Two died serving there and an Irish medical missionary who returned to serve with RAMC died in France. Among the WW2 men remembered is a Gunner from Clogher who died in Yokohama, Japan, and aircrew with graves in Reichswald Forest, Germany, and Belfast. Photo – Tired rays of winter sun blink through clouds over the now quiet killing fields of the Somme at Courcelette

+McREYNOLDS, Hamilton Patterson
Royal Inniskilling Fusiliers, 9th Btn. Private. 23188. Died 12/03/1916. Aged 19. Prior to enlistment, Hamilton was employed at Sessiagh, Stewartstown. He enlisted with the Inniskillings on 15/05/1915 and went to France with the Ulster Division. He was severely wounded by shrapnel from enemy shell fire on 09/03/1916. Born at Donaghey, Sherrygroom on 10/03/1897. Youngest son of Hugh and Jean McReynolds, of Killymoon St., Cookstown. Douellens Communal Cemetery, Douellens, Somme. Stewartstown WM. Donaghendry C of I Parish RH

1942
+HEAP, William James Sydney Jones
RAFVR. Aircraftman 2nd Class. 1123746. Died 12/03/1942. Aged 26. He was a Wireless Operator onboard Blackburn Botha L6314 from No.3 School of General Reconnaissance at Squire’s Gate, Blackpool, Lancashire. It crashed in bad visibility on the cliffs at Burro Meanagh between Cronk ny Arrey Laa and Port Erin on the Isle of Man. William had lived at 40 Glendower Street, Belfast. He was husband to Margaret Campbell Heap of Hendon, Middlesex. Dundonald Cemetery.

+LUTTON, Frederick David
RNVR. Acting Sub-Lieutenant (E). Died 12/03/1942. Age 26. HMS St Briac. The vessel had broken down and drifted towards a British minefield, 20 miles off Arbroath. HMS St Briac hit a mine and sank, leaving a total of 47 dead. He had been rescued from HMS Dunvegan Castle when it was torpedoed earlier in the war. Born 25/10/1915 in the Benburb/Moy area. Son of Joshua and Mary Elizabeth Lutton, Drumgold, Dungannon. (Belfast Weekly Telegraph 10//07/1942). Liverpool Naval Memorial, Panel 4. Moy WM

12/03/1938 – Today in 1938, German troops march into Austria. They face no local resistance; international reaction is subdued.

12/03/ 1943 – Fight for the city of Kharkov, Ukraine. It is considered as the last great victory of German arms on the Eastern Front. The offensive cost the Red Army an estimated 90,000 casualties, German losses around 11,000.