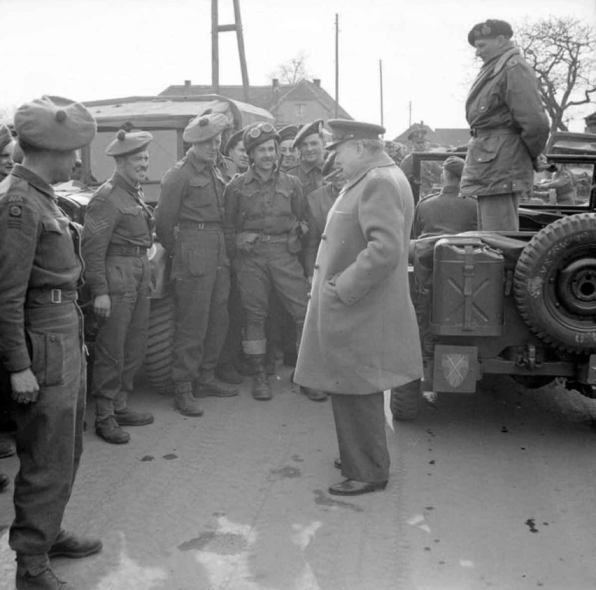 In March 1945 Winston Churchill visits UK forces near the Rhine with Field Marshal Montgomery, the latter standing in a jeep, talking to Scottish troops. There are 16 records in today’s Roll. The 1918 entries reflect the German Offensive including a former CSM of the Royal Irish Rifles who was commissioned into the Royal Naval Division comprised mainly of naval personnel deemed to be in access to manning needs in ships. They fought with distinction at Gallipoli and in most major battles in Europe. WW2 entries reflect the war in the East and the Pacific. A Killyleagh RAF man is remembered in Singapore and a RN aviator with Limavady links served on three carriers in the Pacific.

1918
+CATON, John
RNVR. Sub-Lieutenant. Anson Btn, RND. Rossville, Died 27/03/1918. Killed in the German offensive of March 1918. Enlisted 1 Royal Irish Rifles. 11/19430. Promoted Sergeant and later Company Sergeant Major (Warrant Officer). Commissioned Temporary Sub Lieutenant RNVR 27/06/1917; Draft for Anson Battalion BEF 08/12/1917, joined Anson Battalion 15/12/1917 – 27/03/1918. Born Bury 15/02/1893. His family moved to Muckamore. He worked in York Street Flax Spinning Co. Only Son of John and Elizabeth Caton, Abbeyview, Muckamore. Husband to Robena W Caton, Rossville, Muckamore. His only child was born after his death. His wife and son moved from Railway St, Antrim to Northampton after the war. His son Jack Sydney Caton served in the RAF in World War II and was a PoW in Germany after being shot down. A teacher, he died in Northampton in 2006. Mesmil Communal Cemetery Extension. ADM339

FRY, Robert
Sapper Robert Fry 45910 Royal Engineers. Robert, from Ashton Street Belfast, was an Iron Moulder prior to enlistment and embarked for France in July 1915 serving throughout the conflict and being demobilised on 27/03/1919.