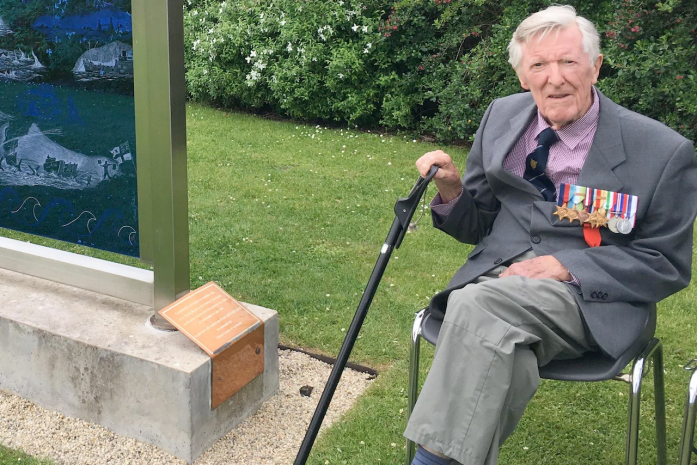 A thanksgiving service was held in Limavady Parish Church for the service and witness of Sir Desmond Cassidi on December 07, 2019. He commanded HMS Ark Royal. He was Flag Officer of the Carriers and Amphibious Ships in 1974. He was Second Sea Lord during the Falklands war.

Amongst those present with members of the family, were Mr Desmond Hill, HMDL for Co. Londonderry, members of the Limavady branch of the Royal Naval Association, and the RBL.

The service was conducted by the rector, the reverend Canon Sam McVeigh, MBE, TD, assisted by Canon Mike Roemelle.

A Bible was used during the service which had been given to the Admiral at his confirmation and which he took with him throughout his life, noting in the margins where he had used it, and other reflections. His ashes were interred in the neighbouring churchyard.

Admiral Sir Desmond Cassidi, who has died aged 94, was a double “Goldfish” – an airman who has ditched in the sea – and an early advocate of women at sea.

For six years, from 1979 to 1982 as Chief of Naval Personnel and Second Sea Lord, then as Commander-in-Chief Naval Home Command from 1982 to 1985, Cassidi oversaw the manning changes necessary for the introduction into service of the Sea Harrier jump-jet and the Lynx helicopter. He also helped to mitigate the effects of the John Nott defence review.

Midshipman Cassidi (right) at the helm

He was also determined to increase opportunities for women in the Navy, for example addressing a shortage of naval pilots by suggesting that women should be trained to fly. The Royal Navy of the early 1980s was not ready for this, however, but subsequent developments show that his vision for the future of naval aviation was absolutely correct.

The son of a naval officer, Arthur Desmond Cassidi was born on January 26 1925 at Limavady in County Londonderry and entered Dartmouth in 1938.

As a midshipman under training he served in the cruiser Cumberland, the destroyer Hardy on Arctic patrols and Russian convoys, and in the battleship Ramillies at the Normandy landings. He gained his wings in 1946 and commanded 820 Naval Air Squadron in 1955.

Cassidi qualified twice for membership of the Goldfish Club, a worldwide organisation of airmen who have ditched in the sea. On December 2 1946 he was flying a Firefly Mk 1 fighter from RNAS Milltown, Scotland, and practising deck landings on the aircraft carrier Theseus, when, by his own admission, “pilot error” caused him to crash. He was rescued from the cold water of the Moray Firth after about 20 minutes by a boat from the destroyer Blencathra.

His second ditching occurred on August 25 1954 in the English Channel, while he was conducting intensive deck-landing trials of the Gannet Mk 1 anti-submarine aircraft in the carrier Albion. His aircraft experienced a fuel malfunction as he launched from the ship; he crashed into the sea off the starboard bow of the carrier, and this time was rescued after about 10 minutes in the water.

Cassidi’s wider talents had been recognised, however, and he was appointed first lieutenant of the Antarctic patrol ship Protector in 1955. He was a student on the staff course in 1957 and he commanded the Londonderry-based frigate Whitby from 1959 to 1961.

HMS Ramillies, on which Cassidi served during the Normandy landings

He went on to serve as fleet operations officer of the Home Fleet (1962–64); assistant director of naval plans (1964–67); commander of the frigate Undaunted and captain of the Second Frigate Squadron (1967-68).

After attending the Imperial Defence College he held the key naval appointment of director of naval plans, and in 1972-73 he commanded the fleet aircraft carrier Ark Royal, an appointment which, notwithstanding his subsequent promotions, he held to be the best.

As a trustee (1984–92) and president of the Fleet Air Arm Museum (1985–95), a source of real pride to Cassidi was the lead he took to enhance the Museum at Yeovilton and, with help from the director of the Science Museum, to acquire a Concorde: today’s world-class museum is largely a testament to his early interest.

In retirement he shook up the Royal Naval Association, was deputy grand president of the Commonwealth Ex-Services League, and championed the D-Day Association. He was also a liveryman of the Worshipful Company of Shipwrights.

Some people saw Cassidi as a rather shy, dour Ulsterman, but he had an impish sense of fun. When a fellow Ulsterman asked if he knew that his secretary (a senior staff officer in the Royal Navy) was a papist, he said “Yes: we provide a balanced view between us”. After the Prince of Wales sampled his home-brew elderflower wine, he also revelled in being styled “royal vintner extraordinary”.

However, Cassidi did not suffer fools at all. In the best interests of the service he demanded high standards, but to those who had proved themselves, he gave clear, concise directions, and left his trusted staff without further interference. He was also deeply concerned about the welfare of his immediate staff and to anyone in trouble he was considerate and generous with his time and hospitality.

Admiral Cassidi with a cadet on board HMS Victory

In retirement in Somerset he proved to be likeable, friendly and courteous with a good sense of humour. He loved his dogs, shooting, fishing and travel; he also became a talented flower arranger, much in demand at weddings, and an expert upholsterer – a skill he learned in a local ladies’ group, where he was the start turn.

Cassidi had married “Scottie”, Sheelagh Marie Scott, in 1950; she died in 1974, leaving Cassidi to juggle caring for their two daughters and a son with his professional life. Later, during the Troubles in Northern Ireland, while courting the surgeon Dr Deborah Pollock (née Bliss), he was caught by the military police in an out-of-bounds area and shopped himself to the Adjutant General.

He married Deborah in 1982, when he joyfully acquired an extended family. He helped her to run the Threshold Prize, a charity to encourage disadvantaged children to read and write, and latterly he cared devotedly for her.

Deborah survives him, along with his children and three stepchildren.

Rear Admiral Arthur Desmond Cassidi usually went by his middle name of Desmond. He was educated at Royal Naval College, Dartmouth, Devon, England. He fought in the Second World War. He gained the rank of Pilot Officer in the Royal Navy.

He held the office of Aide-de-Camp to HM Queen Elizabeth II in 1973.

He was Flag Officer of the Carriers and Amphibious Ships in 1974. He gained the rank of Rear Admiral.