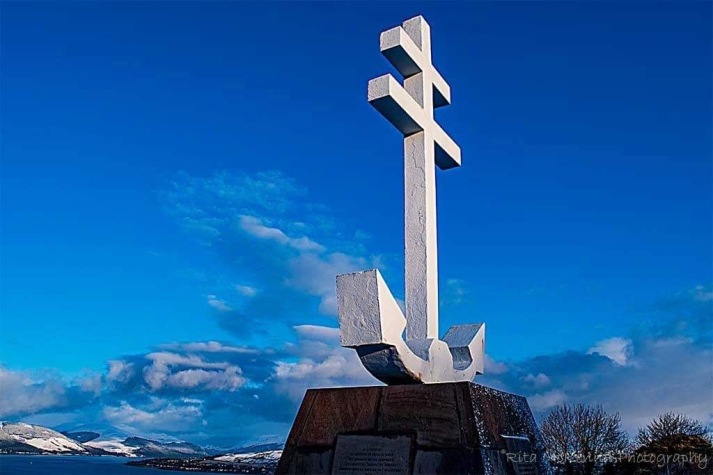 Today is the wedding anniversary of a Coleraine Gunner who married in Brussels on 09/03/1946 and brought his wife home to Tobermore. The Roll today comprises ten men from our three services including three each from the RN and RAF. Photo – Free French Naval Memorial, Scotland

+STEWART, William
Royal Inniskilling Fusiliers. Private.19978. Died 09/03/1915. Born at Rossmore near Lissan, Cookstown. William enlisted in Cookstown, joining the 9th Btn RInF. While in training with the battalion at Randalstown, his health began to deteriorate in January 1915. Lissan C of I Churchyard, County Londonderry, Cookstown WM

Today is the wedding anniversary of a Coleraine Gunner who married in Brussels on 09/03/1946.

Harry Stockman from Tobermore was a Sergeant in the Coleraine Battery of 9 Heavy Anti Aircraft Regiment, a Supplementary Reserve unit. He was one of two members of the battery who met their wives in Brussels.

9 HAA, known popularly as “The Derry Boys”, was raised in January 1939. It had its HQ and two Batteries in Londonderry. 6 LAA battery in Coleraine and 25 Battery in Ballymena.

The Regiment had short term deployments in several locations in the UK however, its service was principally in Egypt, the Western Desert, France, Belgium, Holland, and Germany.

Harry first met Annie a few days after the liberation of the capital city. He was stationed at Brussels airport where Annie worked and close to where she lived. Annie who was almost 18 years of age spoke English and she was chosen to speak to the soldiers invited to a street party in her neighbourhood.

Then Harry and Bob McClintock came from the base to recall the soldiers because the Germans had advanced in the Ardennes. Harry was introduced to Annie.

It was four months before they saw each other again. Romance blossomed and despite her father’s concern about her future, Annie and Harry married in the Anglican military church in Brussels on 09/03/1946.

Annie found the mid-Ulster dialect difficult to understand and, to the amusement of her neighbours in Tobermore, she often resorted to using a dictionary. She later commented, “I’ve lived here for over 60 years and when some people hear my accent they still ask me if I am over here on holiday.”

Annie found the people of Tobermore to be very kind and she lived there since 1946. She said, “I have been very happy in Tobermore. I never regretted coming to Tobermore. The people here have always been very friendly.”

Harry died in 2000 and Annie lived on in Tobermore surrounded by the many friends and relatives of the Battery veterans from the neighbourhood.

– Adapted from “The Coleraine Battery” by Ronnie Gamble

Tanks remain in defensive positions. 1415 – 5 tanks of C Sqn with two platoons of Para made recce in force under orders of Corps Commander…

*Corrected to – “a total of 6 missing. Sgt Hewitt and Trooper Currie were killed. Troopers McKerrow and Smith were later found wounded. Troopers Harrison and Johnston were taken prisoner.”

The battle report covers the events in more detail.

On 8th March about 1200 hours, one Troop of C Squadron under Lieut. J. E. Williams, with Capt. Sidebottom in support in a close support tank moved up the road Djebel Abiod-Sedjenane to support 1st Parachute Brigade in driving out the enemy who had infiltrated into our positions in the area round Sidi Moh Belkassen…

The number of enemy killed could not be ascertained but they were thrown into considerable confusion and 157 prisoners were taken, including five officers. The co-operation between infantry and tanks was excellent.
On 9th March the corps commander ordered a reconnaissance in force and himself detailed the force to consist of two platoons of infantry and six tanks…

The In-reserve tank then withdrew and picked up Lieut. Williams and crew en route. Approximately 27 prisoners were taken and some useful information was obtained. Throughout the day the road was under very heavy mortar and artillery fire. Casualties suffered while the Regiment was under fire: Killed: Sgt Hewitt, Tpr Currie. Wounded: Tpr McKerrow, Tpr Smith. Taken prisoner: Tpr Harrison, Tpr Johnston.