Robert Turkington from Lurgan is amongst the foremost fighter pilots in WW2 from Northern Ireland.

With a confirmed total of 11 ‘kills’ to his name – three of them shared – plus a ‘probable’ and four damaged, Robert Turkington emerged as one of the most successful pilots to hail from the ‘Emerald Isle’ in the war, second only to the likes of Wing Commanders B. E. F. ‘Paddy’ Finucane and J. I. ‘Killy’ Kilmartin.

He attended Lurgan College from 01/09/1933 until 30/08/1939. He joined the RAFVR almost straight from school.He became a highly successful pilot, and had the distinction of being awarded the DFC and Bar before his death. He was awarded the D.S.O. posthumously.

Having lent valuable service in Operation “Jubilee” off Dieppe in August 1942, Turkington opened his account in a Hurricane of No. 43 Squadron – the “Fighting Cocks”- over North Africa in late November 1942. On converting to Spitfires in the following year, he added swiftly to his score over Sicily and Italy, five enemy aircraft falling to his guns in November 1943 alone

Then in July 1944, as a Flight Commander in No. 241 Squadron, he raised his score to double figures, destroying four Me. 109s, two of them on the same day.

His subsequent – and ‘brilliant leadership’ – of No. 601 Squadron was marked by numerous episodes of high valour. On one occasion he made no fewer than six attacks on a heavily defended enemy strongpoint until reducing it to ‘burning wreckage’. His Spitfire returned to base in a badly shot-up state at an alarming rate – but he treated such episodes ‘in a characteristically light-hearted manner’

He was promoted to the rank of Squadron Leader, with 241 Squadron, based in Italy following the defeat of the Germans. Squadron Leader Turkington died in a flying accident in July 1945 when his aircraft exploded during a manoeuvre.He was aged 26 years. 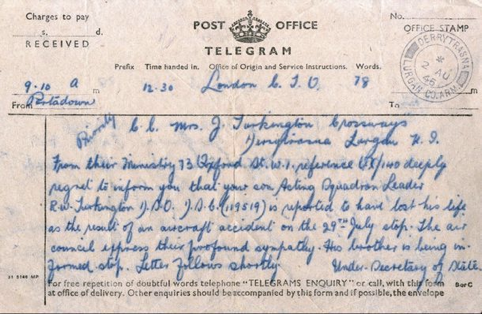 The tragedy was compounded by the circumstances of the Air Ministry’s notification of his death: as his mother opened the telegram in question on 2 August 1944, she understood it to be confirmation her gallant son’s long-awaited home leave. He is buried in Padua War Cemetery. He was awarded the D.S.O. posthumously

‘Squadron Leader Turkington took over command of 601 Squadron on 2 August 1944, at which time he was awarded a Bar to his D.F.C. for brilliant fighter and strafing work with 241 squadron. Since that time he has carried out 81 fighter-bomber sorties, bringing his total operational hours to 615 and his total operational sorties to 453. Squadron Leader Turkington is now O.T.E.

Squadron Leader Turkington has been inspiring and brilliant in his leadership while commanding 601 Squadron. As a fighter-bomber pilot he has, by personal example, taught his pilots with determination and accuracy from a low-level; the inevitable return fire he treated in characteristically light-hearted manner, although repeatedly hit himself. In this way he brought squadron morale, spirit and efficiency to the highest possible pitch, and commanded the absolute loyalty and devotion of those serving under him.

Squadron Leader Turkington has a particularly inspiring record as a close support leader. Many times he has destroyed his target through sheer dogged persistence, strafing repeatedly until his ammunition was exhausted. Thus, on 26 December 1944, leading a formation of six aircraft against a strongpoint, four bombs were not seen to explode and the other two went wide; accordingly, he led his aircraft into strafe no less than six times, despite return fire, and only left the target area when the strongpoint was reduced to burning wreckage. On 31 December 1944, under similar circumstances, and with a depleted formation, he strafed eight times to destroy the target completely.

On 5 January 1945, his aircraft was badly damaged by flak; he found it impossible to control, and would have baled out but for the fact that he needed both hands to maintain control. He succeeded in flying it back to base, and force landed successfully despite the fact his aircraft stalled at 160 m.p.h. – a very fine feat of airmanship.

For his great courage, undaunted cheerfulness and successful leadership, I strongly recommend Squadron Leader Turkington for the award of the Distinguished Service Order.’

‘Flight Lieutenant Turkington took part in Dieppe and came overseas with the Squadron and now has 16 months service with us. He quickly made his mark as a fine leader and during the whole of the North African and Sicilian campaigns showed the greatest skill and enthusiasm to engage the enemy. His score to date is 5 E./A. confirmed and 2 damaged. His consistent resourcefulness, skilful flying and untiring devotion to duty has set a magnificent example to the rest of the Squadron, many months of which were spent under the most arduous conditions. I cannot too strongly recommend this award.’

‘On 29 July 1944, this officer was leading a section of two aircraft which intercepted two Me. 109s. In spite of the fact that only one cannon was firing, Flight Lieutenant Turkington destroyed one of the E./A. and probably destroyed the other, thus brining his score during the last ten days to 3 E./A. destroyed and one probably.

It is chiefly due to the fine example of skill, courage and devotion to duty shown by this officer that the Squadron owes its recent successes, for such was his keenness to engage the enemy that he flew on practically every patrol. On one occasion he was engaged for ten minutes by two Me. 109s, but with great skill and gallantry he warded off all their attacks and eventually they were both forced to retire.’

There were ten more former pupils of the College who died serving with the RAF in WW2. Their record of service will be the focus of future psts on Remembrance ni