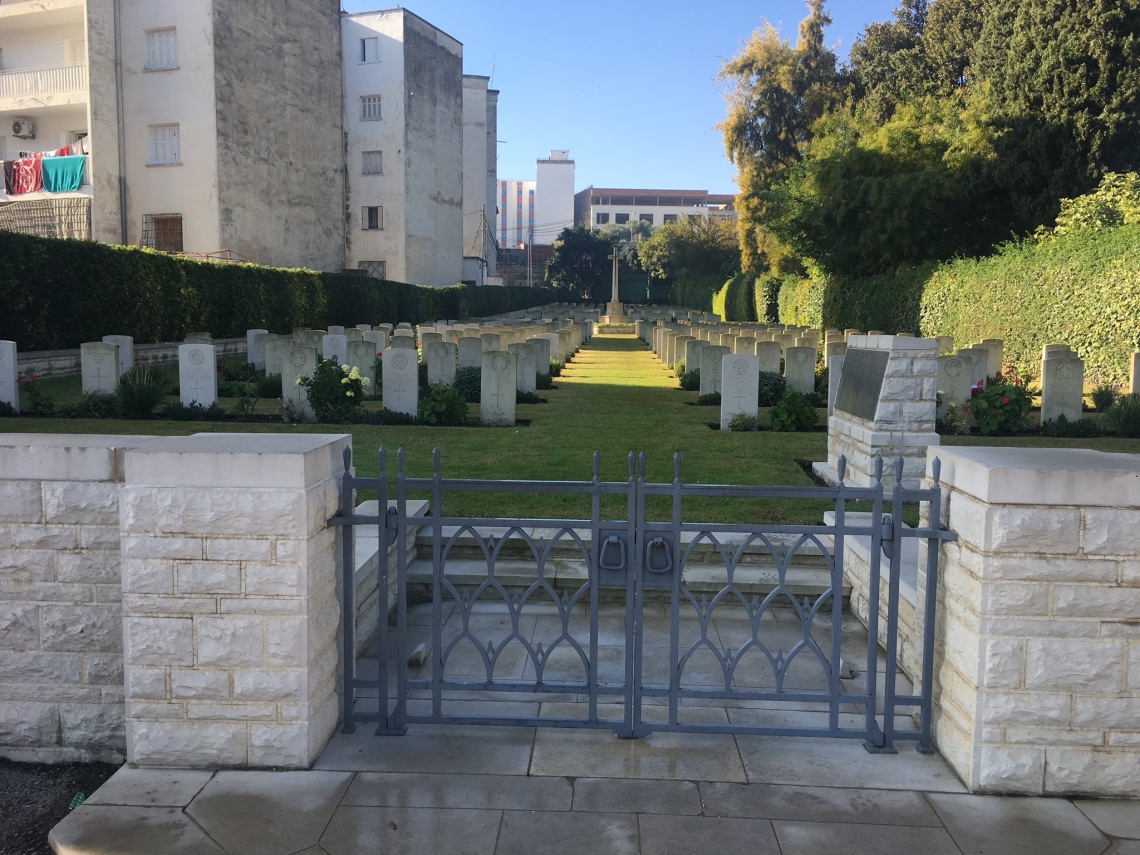 Known as ‘Paddy’ to those he served alongside, on 17/06/1941, he went missing in action during the Western Desert Campaign near Libya.

The 7th Armoured Division was part of intense fighting in North Africa at the time. Liggett’s name appears on a casualty list for the day. Casualty number 566 was reported to the War Office Casualty Section. Less than 24 hours later at 0900hrs, he was back in action. This action was part of the withdrawal from the disastrous ‘Operation Battleaxe’ offensive. This retreat began on 17th June 1941 – the day Liggett was recorded as missing. Seven weeks before, his wife Kathleen received an aerogramme saying Sergeant Liggett was “fit and well”.

Rommel took the withdrawal of the 2nd and 6th RTR as a sign that the British left flank was crumbling and on the night of 16th June, he concentrated both the German 15th Panzer and 5th Light Divisions and struck hard at the left flank of the 7th Armoured Division.

The German attack started at 0430 hrs with 75 tanks supported by artillery and smashed straight through the Division’s lines, with the Germans heading for the crux of the battle at Halfaya Pass. The 4th Indian Division had been pushed out of Sollum and was ordered to withdraw along the coastal plain. At Fort Capuzzo 22nd Guards Brigade were nearly trapped by the advance and General Creagh ordered the surviving tanks of both 4th and 7th Armoured Brigades to fight a defensive battle.

Ably enforced by the Support Group, the British tanks fought a six-hour battle, which gave time for the 22nd Guards Brigade and the 4th Indian Division to withdraw successfully. When he found out that his trap had been unsuccessful Rommel was furious. Supported by RAF bombers XIII Corps was in retreat and on the 17th June, the 7th Armoured Division was back in Sofafi, where it had started from three days before.

Battleaxe became a byword for blundering.

Morale was not good in North Africa. The corps lost almost 1,000 casualties and 91 tanks. This included 122 killed, 588 wounded and 259 missing. 58 Matilda tanks and 29 cruisers were out of action. In fact, 81% of the British tanks were out of commission after only three days of the offensive starting. By comparison, the Germans lost just 12 tanks over the same period.
A prisoner in Italy

Sforza Costa lay by a railway twelve miles south of Macerata in the Marche region on Italy’s east coast. The camp stood on the western edge of the town about a mile from the railway station. The building of a sugar beet refinery was opened as a prisoner of war camp in 1942.

The camp layout was capital E-shaped and constructed of thick concrete. The middle section contained the entrance through a large archway. The north and south wings were tall storage buildings used to hold captured men on one floor with no dividing walls.

The camp stood in a six-acre open area, surrounded by a no man’s land of 15′ between a 10′ inner fence and a 30′ outer fence. Coils of barbed wire topped both fences. Every fifty yards stood a wooden sentry post with a machine gun armed guard.

Life in an Italian POW Camp

A Blackshirt Colonel ran the camp. He had taken part in Mussolini’s “March on Rome”. While most of the officers were elderly, they received help from the local Carabinieri. There were two interpreters in the camp when Sergeant Liggett was there. The first, known as “Harry’s Brother” was a waiter, caught in the wrong place at the wrong time. He had worked at the Savoy Hotel. The second, known by “Wee Jock” was from a respected Glaswegian ice-cream selling family. He had returned to Italy for his grandmother’s funeral.

In 1942 and 1943, the number of inmates rose from around 2,000 to over 8,000. The camp was not designed for this many people. There was only one toilet block with a dozen “squatters” and three running water standpipes.

Sergeant William Cooper provided details of the camp. He also claimed the British administration were “too friendly” with the Italian guards. The higher ranking officers were able to smuggle in food and wine for themselves. Those in the lower ranks could never smuggle in escape equipment or radios. When the Italians withdrew from the Axis in 1943, British administration even offered to take over. They would stand guard over their own men until replacement troops arrived.

Alexander Liggett escaped from Sforza Costa in 1943. It’s likely he escaped along with around 1,000 other inmates on 15/09/1943. They took their chance to walk straight out of the camp while unguarded. The Italian guards left after their country surrendered. It took several days for German guards to replace them.

Lenn Dann talks of the escape in his book “Laugh – We Ran”. He claims the British officers paraded their men in the recreation field on the day the Italians left. A senior officer spoke of separate peace and warned them there was no need for “bloody silly heroics”. Those who ignored his plea made their escape after their evening meal. They had no idea when they would next get a chance to eat.

The prisoners of Sforza Costa had similar stories. Many found themselves captured in North Africa during the Tobruk campaign. This was one reason for the swell in numbers in 1942. Those who fled the camp in 1943, headed for the mountainous countryside. Italian families in rural areas gave them a warm welcome. They fed and clothed the men and in some cases gave them work and a bed for several weeks.

A letter written from Sergeant Alexander Liggett to his wife Kathleen in 1943.

8th Letter. Dearest Kathleen here is another letter to you. I’m still going strong, but I still wait for a first letter from you, and of course I’ve had no parcels yet. Still, I’ve got nothing else to do so I can wait.

One of our chaps has died here and he had a lovely funeral. All the soldiers lined the road and some of them walked behind the coffin. It was very impressive. He was married 18 months ago in England. He was only with his wife about a fortnight before he went out to the East. It’s pretty hard lines on her and his mother, still it’s the war and these things will happen.
[Censored]
There is nothing more to say in this letter as nothing ever happens here. I still love you as dearly and I’m longing for the time when we can be together again. I’m always thinking of you sweetheart and I’m always talking to other chaps about you. I’m very proud of my wife. I’ve got no photos. Will you send some darling? You can send in an ordinary letter costing five pence.
Cheerio darling. xx Alex xx.
8th March 1943.

A fellow escapee, Terry Moriarty, wrote to Liggett’s family to let them know he was alive and well after the escape. Many of those who escaped in Italy were later recaptured and detained in the Stalags of Germany. Stalag IVD and IVG in Muhlberg on the river Elbe became infamous. This is not where the war would end for Sergeant Alexander Liggett.

The Germans imprisoned Sergeant Liggett again in 1945 and held him in Muhlberg’s Stalag IVB. Stammlager 4B was north of Dresden. It operated for the duration of the war from October 1939 to September 1945. IVB was the largest prisoner of war camp on German soil.

This camp differed from the Italian prison. It held over 10,000 men in a rectangular 1.0km by 0.5km compound. A central avenue divided the camp in two. Today, the area is a dense forest. Ruins of latrines still hide among the trees. There are also carved stones dedicated to the memory of those who did not survive the horrors of the camp. Stalag IVB also served as a Soviet Gulag and held German prisoners after the war’s end.

Dearest Kathleen it’s now four months since I heard from you and I don’t think you are getting any from me but I’ll keep on dropping a line just in case one gets through.
I’ve made you another remittance of £20 and I hope you get them both, that is, one from me for £15 and this last one for £20. When you get it give five to my mother and tell her to buy something for herself. Cheerio darling. All my love, Alex.

Sergeant Liggett and The Desert Rats

263765 was the number given to Sergeant Alexander Liggett in Stalag IVB. Those numbered alongside him served in the Durham Light Infantry. Their 15th Battalion had amalgamated with the Royal Armoured Corps in 1942 forming the 155th Regiment. This regiment would press towards the Elbe and take Hamburg in May 1945.

The three men were likely captured together in north-west Germany. German resistance around Hamburg was strong, particularly around Jesteburg. The Wehrmacht would place bombs under bridges to slow down the Allied armoured divisions.

This infamous group was the 7th Armoured Division; TheDesert Rats. The progress of Sergeant Liggett can be tracked from Egypt in 1940, through France in 1944 and on to victory in Hamburg in 1945.

Two months after the war ended, Sergeant Liggett was demobbed and returned to civilian life. Like many POWs, he was undernourished and was placed on a special diet. On his return to Portadown, he worked at Wilson’s Canning Factory on Castle Avenue. He would later work in the Post Office sorting office for 27 years until his retirement. After this, he briefly worked in security at Craigavon House until his 70s.

He was well-known in Portadown from Shamrock Park Social Club to Armagh Road Church. He was also a member of Corcrain Purple Rocket LOL 339 and Kilmoriarty Royal Black Preceptory 267. Alexander Liggett lived at 12 Granville Square, Portadown with his wife Kathleen and son Joshua. He died aged 77 after an illness in Craigavon Area Hospital.