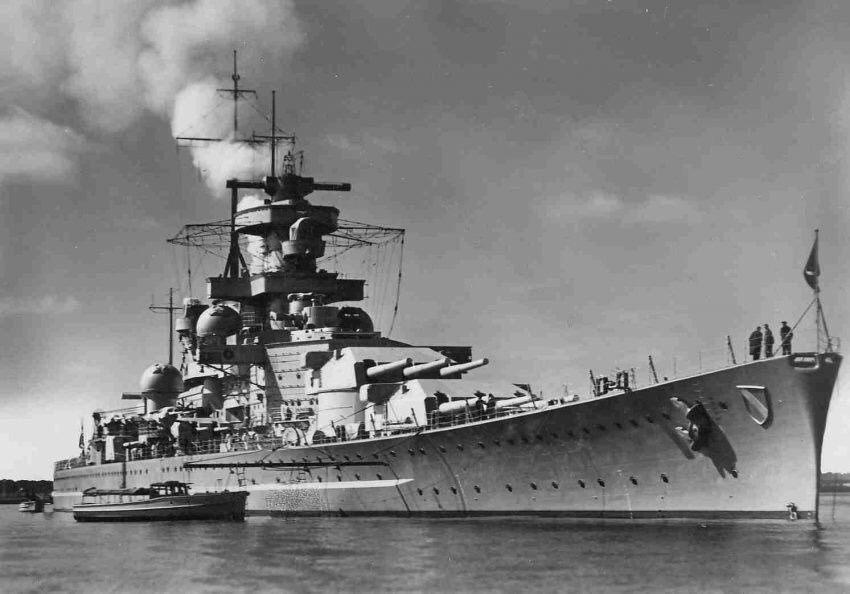 On this day in 1943 the last capital ship big gun engagement between the Royal Navy and Germany took place at the Battle of North Cape where Admiral Bruce Fraser took on and sank the Scharnhorst whilst she was attempting to attack convoys. Thomas Prior was a Signalman in HMS Norfolk at the Battle of North Cape. On his return to Belfast he was presented with a wallet of notes by his neighbours in Arundel St., Belfast.

Scharnhorst was attempting to attack convoysJW55A & JW55B. She was engaged by the battleship Duke of York, Cruisers Jamaica, Belfast, Sheffield and Norfolk with accompanying destroyers.

Konteradmiral Erich Bey commanding Scharnhorst had detached his accompanying destroyers to search for the convoys in atrocious weather when he encountered Norfolk, Belfast and Sheffield commanded by Vice Admiral Robert Burnett. It was 9am and the range was 13000 yds.

Scharnhorst scored no hits but was struck twice. One hit crucially took out her radar which left her virtually blind in a mounting snow storm. Her gunners were reduced to firing at the gun flashes of the cruisers which meant that she only engaged Norfolk as Belfast and Sheffield were using flashless propellant.

Bey turned Scharnhorst away and disengaged hoping to lose the cruisers and then get round them and at the convoy. Burnett did not follow but positioned his cruisers between Scharnhorst and the convoy and was rewarded with Scharnhorst coming right back to him.

In the next stage, Norfolk was hit twice losing one turret and her radar. However, Scharnhorst was kept from the convoy and Bey decided to return to port. Burnett now pursued leading to Belfast reacquiring Scharnhorst though she was terribly exposed as Sheffield and Norfolk had engine problems which left her isolated saved only by Scharnhorst having lost her radar. With Scharnhorst located Admiral Sir Bruce Fraser closed with his covering force of Duke of York, Jamaica and 4 destroyers HMS Savage, Scorpion, Saumarez, and HNoMS Stord of the exiled Royal Norwegian Navy.

At 16:48, Belfast fired star shells to illuminate Scharnhorst. Scharnhorst, unprepared with her turrets trained fore and aft, was clearly visible from Duke of York. Duke of York opened fire at a range of 11,920 yds and scored a hit on the first salvo disabling Scharnhorst’s foremost turrets (“Anton” and “Bruno”) while another salvo destroyed the ship’s aeroplane hangar. Bey turned north, but was engaged by the cruisers Norfolk and Belfast, and turned east at a high speed of 31 kn.

Bey turned away as a shell from Scharnhorst severed the wires on Duke of Yorks leading from the radar scanner to the Type 284 gunnery control radar set. Lt H. R. K. Bates RNVR climbed the mast and managed to repair the broken wires in the midst of a snow storm in a violent arctic ocean. Duke of York now hit Scharnhorst with her death blow as a shell crashed into her number one boiler dropping her speed to 10 knots and though repairs got her quickly back to 22 knots she was exposed to the destroyers. Bey sent his final radio message to the German naval command: “We will fight on until the last shell is fired.” The 4 destroyers closed and launched scoring 4 hits Saumarez being mauled by Scharnhorst secondary guns.

Scharnhorst’s speed again fell to 10 knots, allowing Fraser to rapidly close the range. Scharnhorst illuminated by starshells “hanging over her like a chandelier”, Duke of York and Jamaica resumed fire, at a range of only 10,400 yd. At 19:15, Belfast joined in from the north. The British vessels subjected the German ship to a deluge of shells, and the cruisers Jamaica and Belfast fired their remaining torpedoes at the slowing target. Scharnhorst’s end came when the British destroyers Opportune, Virago, Musketeer and Matchless fired a further 19 torpedoes at her. Wracked with hits and unable to flee, Scharnhorst finally capsized and sank at 19:45 her propellers still turning. Of her crew of 1968, only 36 rescued, 30 by Scorpion and 6 by Matchless. Neither Rear Admiral Bey nor Captain Hintze was among those rescued, although both were reported seen in the water after the ship sank, nor were any other officers. Scorpion tried to rescue Bey but he foundered. Fraser ordered the force to proceed to Murmansk, making a signal to the Admiralty: “Scharnhorst sunk”, to which the reply came: “Grand, well done”.

Later in the evening, Fraser briefed his officers on board Duke of York: “Gentlemen, the battle against Scharnhorst has ended in victory for us. I hope that if any of you are ever called upon to lead a ship into action against an opponent many times superior, you will command your ship as gallantly as Scharnhorst was commanded today”

A documentary made while many of the participants were still alive https://www.youtube.com/watch?v=o_LVS-u26no