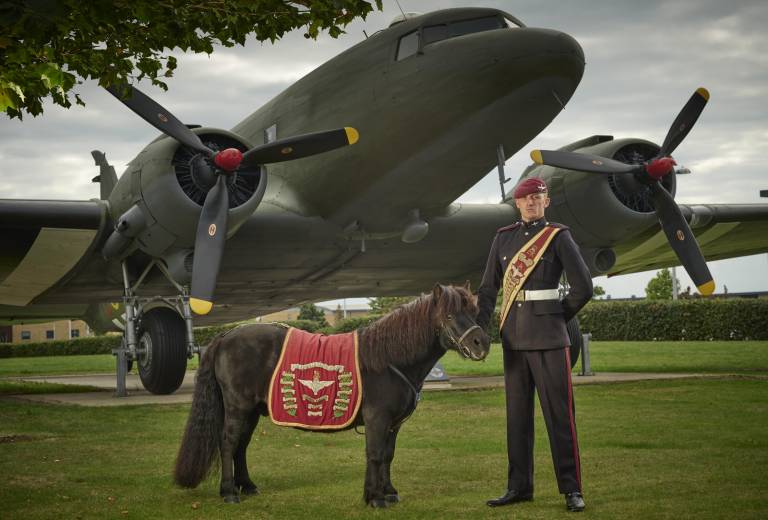 Amongst our Veterans today is one who was serving with 1st NIH Regiment when it was dismounted and converted to a cyclist unit, serving as corps cyclists to V Corps for the remainder of the war. He was one of four NIH who were affected by mustard gas bombardment at Beaumont Hamel. Photo – Pony Major Pte Mike Cochrane of the Parachute Regiment with Pegasus V in front of a Second World War Dakota aircraft at Colchester Barracks

See article on this site on this date about HMS Formidable. The battleship HMS Formidable was torpedoed and sunk by German submarine U-24 while on exercise off the coast of Devon. She sank with heavy loss of life: 547 dead from her complement of 780. There were at least six from NI lost. The first Royal Navy battleship to be lost in WW1.

+GRAHAM, Skeffington
RNAS. Petty Officer Motor Mechanic. F/2852. Russian Armoured Car Brigade. Died in hospital whilst a PoW in Turkey 01/01/17. Age 32. Born Belfast 06/06/1886. Son of Mr. and Mrs. Robert Graham, Dunmurry, and husband to Mary J. S. Graham, Alton Avenue, Toronto, Canada. Address also found as Upper Canning St., Belfast. His remains were buried in Haidar Pasha Cemetery, Istanbul, Turkey. Haidar Pasha Cemetery was first established for Crimean war burials and was used during the First World War by the Turks for the burial of Commonwealth prisoners of war. After the Armistice, when Istanbul was occupied, further burials were made mainly from No 82 General Hospital and remains were brought in from other civil cemeteries in the area. IMR. ADM 188/565/2852

+BRADLEY, William Jospeh
RM. Marine. PLY/X 3580. Died 01/01/1943. Age 22. HMS Fidelity. Son of  Mr and Mrs John Bradley, Queen St., Londonderry. He was reported missing in March last and his parents were informed officially that “it has become necessary to presume his death”. Aged 22 and  unmarried he joined the RM at the outbreak of war and had been serving with a Commando unit. Before the war he had been in business in London, having been previously in the employment of the Northern Counties Hotel, Londonderry, with his father who was a member of staff of the American Red Cross Club. (Belfast Weekly Telegraph 09/04/1943, Derry Standard 03/09/1943). Plymouth Naval Memorial Panel 83

+LLOYD, James Hill
RN. AB. P/JX 189415. Died 01/01/1943. Age 22. HMS Fidelity. He had previously survived the sinking of the Ark Royal. Before joining up he was in the Stereo Department of the Belfast Telegraph. He was a member of the Norther Swimming Club. Three brothers also served with HM Forces. Son of Iorwerth Griffith Lloyd and Jean Hill Lloyd, Somerdale Pk., Belfast. (Belfast Weekly Telegraph 28/12/1945). Portsmouth Naval Memorial, Panel 75

+WHITE, William Bell
RNR. Lieutenant – Commander (E). RD. MiD. Died 01/01/1943. Age 42. HMS Fidelity. RBAI. Malone RFC. Earlier he was in a ship torpedoed in the North Africa landings and he was mentioned in despatches for efficiency and devotion to duty on that occasion. Served an apprenticeship with Harland & Wolff, joined P & O and whilst with the latter held a commission in the RNR. Second son of Commander William Bell White, RD, RNR. and of Amalia Bell White; husband to Lilli Bell White, Christchurch, Hampshire. (Belfast Weekly Telegraph 15/10/1943). Portsmouth Naval Memorial, Panel 79 Lieutenant – Commander White was an uncle of Dr Dennis White of Dunmurry who kindly responded to remembrance ni enquiries.

+McLAUGHLIN, Edward Colhoun
RAFVR. 2204122 . Died 02/01/1944. 100 Sqdn. Edward (Ted) was the son of Edward and Jeanie McLaughlin, Ballyronan. Prior to the war he worked in Walsley, England with his uncle in his grocer’s shop. During the war he flew numerous missions over Hanover, Bocum, Hagen, Munich, Kassel, Stuttgart, Dusseldorf and Berlin. His plane did not return from an operational sortie on the night of Sunday, 2/3 January 1944. Runnymeade Memorial, Panel 232. Rainey Endowed RH

MAJURY, James
James Majury was born on 14 May 1895 at Ballyclare, Doagh Grange, County Antrim, the first of nine children of bread-server James Majury and his wife Elizabeth. Although he grew up in Ballyclare, by 1911 he was living with his family at 45 Farnham Street, Belfast, and working as a bread-packer. The following year the family moved to 36 Raby Street.

Majury enlisted in the North Irish Horse on 8 November 1915. He embarked for France in 1916, where he was posted to E Squadron, which from May that year was one of the three squadrons of the 1st North Irish Horse Regiment, serving as corps cavalry to VII, XIX, then V Corps.

In February and March 1918 the 1st NIH Regiment was dismounted and converted to a cyclist unit, serving as corps cyclists to V Corps for the remainder of the war.
V Corps was on the Somme front on 21 August 1918 – the day the Advance to Victory offensive began in that sector. V Corps’ 21st Division were to attack north of the Ancre, with its 1st and 2nd Lincolns in front. To assist them, two officers and sixty-seven other ranks of the North Irish Horse cyclists were attached, taking with them all nine of the regiment’s Lewis guns. The eve of the battle found the 2nd Lincolns, with their North Irish Horse Lewis gunners, positioned east and south-east of Beaumont Hamel. That evening the Germans opened an intensive mustard gas bombardment on the reserve positions. The 2nd Lincolns sustained many gas casualties. Among them were four North Irish Horsemen, including Private Majury, who also sustained a shrapnel wound to his left eye.

Majury was evacuated to the UK for treatment, where he was admitted to King’s College Hospital in London, remaining there for three months. On 30 January 1919 he was discharged, being no longer physically fit for war service and surplus to military requirements.

Majury’s brother Samuel also served in the war, as a private in the motor transport branch of the Army Service Corps.

On this day in 1945, the Luftwaffe launches its last major air attack of WW2: Operation Bodenplatte. The 1,000-plane raid causes only moderate damage and does nothing to stem the Allied advance into Nazi Germany.