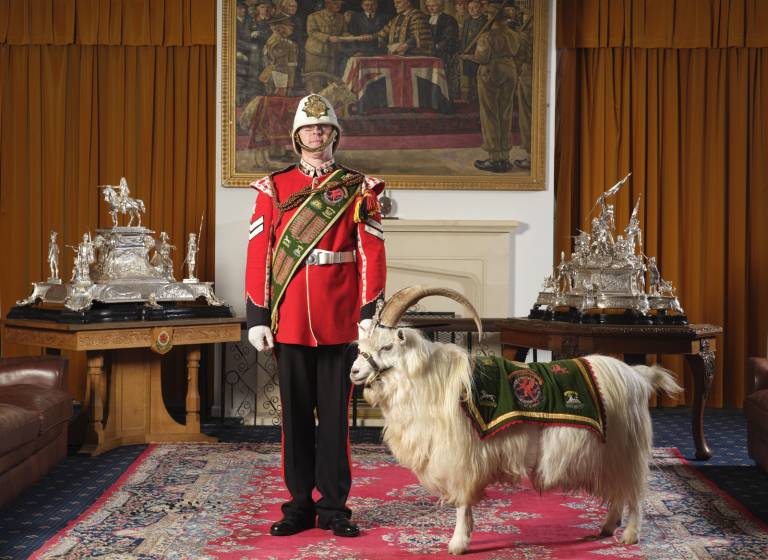 Moving accounts of the wartime funeral of a young RAF man from Lurgan and the death of 6 Skins Adjutant caused by an air attack on a car he was in, form part of today’s Roll of Remembrance. Photo – Goat Major Fusilier Matthew Owen of 1st Battalion The Royal Welsh with Llywelyn, the regimental goat. Queen Victoria presented the first official goat in 1844.

+WRIGHT, Wilfred
RAF. Aircraftman 2nd Class. 538668. Died 04/01/1940, at RAF Warmwell after a short illness. Aged 20. 103 Sqdn. He already had three years of service in the RAF when he took ill at a base in Dorset. He died from a cerebral haemorrhage in the sick quarters at RAF Warmwell. Prior to enrolling, he worked in the Tavanagh Weaving Factory where his father was a foreman tenter. His father was also a well-known member of the Orange Order, Royal Black Preceptory, and the Independent Order of Rechabites. Wilfred was a member of Hope of Portadown Juvenile Tent Independent Order of Rechabites 1107 from birth. Wilfred was a former member of 1st Portadown (Thomas Street) Boys’ Brigade. On Christmas Day, 1939, he had attended two services at Thomas Street Methodist Church while home on leave.

On 07/01/1940, the RAF transported the airman’s body to Belfast. The Wing Commander of RAF 103 Squadron wrote, “Wilfred was a good and keen airman, and he will be a loss to the service.”

The local newspaper noted that “the procession represented all sections of the community. A carrier proceeded by Officer G Crump and a detachment from RAF Aldergrove bore Airman Wright’s coffin draped in the Union Flag.

“A band of pipers played laments as the funeral made its way via Thomas Street, Carleton Street, Church Street, Market Street, High Street, and Castle Street. Crowds lined the streets and businesses shut down and drew their blinds.

“The town is moved today as it is not often moved, with a great sympathy and sorrow. The thoughts of many centre in this home as the passing of Mr. Wilfred Wright has brought the war very near to us all. Though he was still in training, we feel he died for his country just the same as if he had died on the battlefield. He was willing to sacrifice himself for the cause of freedom, and our affectionate respect goes out to his father and family.

Born on 06/02/1919, he was the son of James Wright and Esther Wright of Burnbrae Avenue, Portadown, Co. Armagh. He was the third of four brothers. A younger brother, Eric Dudley Wright also served with the Royal Air Force and was in France in 1940. Drumcree Church of Ireland churchyard. Portadown WM. Thomas Street Church WM

1943
+CARRUTHERS, Robert Morris Liddell
Royal Inniskilling Fusiliers, 6th Btn. Lieutenant.180162. Died 04/01/1943. Aged 22. Lt Carruthers, who was 6 Skins Adjutant and intelligence officer, was hit in the head in a ME 109 attack on the car he was travelling in with the Skins’ commanding officer Lieutenant Terence Macartney-Filgate on the road between El-Aroussa and Bou Arada at 0830hrs on 20/12/1942. He died of his wounds 15 days later at the Thibar dressing station. Macartney-Filgate recovered from his wounds, occupied staff positions and was awarded an OBE in 1945. Son of Lieut.- Comdr. Robert Jardine Carruthers, R.N.V.R., and Georgina Rose Carruthers, of Blindley Heath, Surrey; husband of Doris Joan Carruthers, of Katesbridge, Co. Down. Dely Ibrahim War Cemetery, Algeria

On This Day 4th Jan 1918.
HMHS Rewa a British hospital ship was hit and sunk off Hartland Point by a torpedo from U-55. The ship took around 2 hours to sink, allowing all 279 wounded and ship’s crew to board lifeboats except for the 4 engine men who died in the initial explosion.

On This Day 4th Jan 1943
HM Submarine P311 was lost on or around this date off Maddalena, Sardinia, possibly after striking an Italian mine. She was lost with all hands (71 men). Her wreck was discovered in 2016.